What does ark mean in the bible 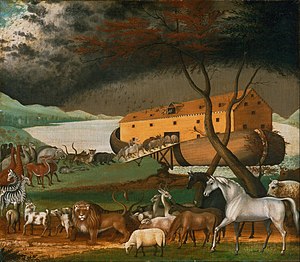 A pair of each species went on Noah's ark.

The story of Noah and his ark is the third great story in the Old Testament. It follows the creation of the earth and the story of Adam and Eve.

The word ark simply means "box". It was made of wood, so it could swim. It was three stories tall and about the size of the Titanic. In it, Noah, his family and many animals survived the great flood.

Most scholars today believe that the story of Noah and his ark did not really take place that way. Rather, she wants to say something about faith. But there are also people who are convinced that the story actually took place that way. People keep looking for the remains of the ark. There are even modern replicas of it.

What does the Old Testament tell? 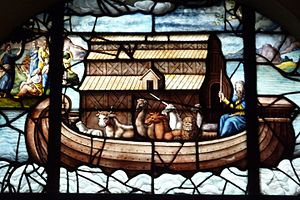 People had turned away from God again and did not live in such a way that God could enjoy them. The only exception was Noah and his family. So God decided to drown the whole world in flood and save only Noah's family. That is why God spoke to Noah himself.

God told Noah to build the ark so that he and his wife and sons Shem, Ham, and Jafet might be saved. The wives of the three sons should also survive, as well as a pair of each animal.

For forty days it rained like buckets until all the mountain peaks were under water. Noah did not let anyone into the ark anymore. All people and animals outside the ark drowned. This event is also called the "Flood". That actually means: the sin flood.

After the water receded, Noah let a pigeon fly. She came back with an olive branch in her beak. God promised he would never again destroy living things with water. As a sign of this new covenant, God put the rainbow in the sky. This meant that peace was restored between God and man. The rainbow, the dove and the olive branch have been symbols of peace ever since.

What do other books tell about Noah?

There are several very similar stories. For some it is not clear whether they are a little younger, about the same age, or even a little older than the story in the Bible. The best known of them is in the Epic of Gilgamesh. It comes from ancient Babylon and is around 3800 years old.

The Koran tells the story very much like the Old Testament. Noah preached to the people for a very long time so that they would only believe in Allah and not in many different gods. However, it was unsuccessful. He built the ark and survived the Flood in much the same way as the Bible describes it.

In the New Testament, Jesus himself speaks of the Flood. He urged people to be vigilant and pray. Because at the end of the world only those people would survive who had believed in God. At the time of Jesus there were also other books that told of Noah and his ark. This shows that this story was widely known.