What causes fire to light up creates light

Ludwig Boltzmann on the Maxwell equations

Plasma astrophysics
at the
University observatory

We are used to it from the school desk
all substances in three physical states
- solid, liquid and gaseous -
to divide.
In recent years, however, the
fourth physical state,
which one because of his strange behavior
plasma
designated,
more and more the focus of interest

To designate the plasma (Greek: the malleable) as the fourth aggregate state, on the one hand follows the Greek philosophers who knew the elements earth (solid), water (liquid), air (gaseous) and fire (plasma). On the other hand, the designation as a new state of aggregation is also apt from a modern point of view, because at the high temperatures the atoms break down into positive ions and negative electrons and thus the breakdown of matter into its components is continued by a new process.

A plasma is a completely or partially ionized gas which, as an electrically conductive medium, has a number of properties that clearly distinguish it from gases, liquids or solids.

"Physicists have only been talking about plasma for a short time, but everyone has seen it. In the imposing spectacle that lightning and northern lights offer, the plasma is the main actor. Anyone who has had the" pleasure "of shorting an electrical line also made acquaintance with plasma. The spark that leaps from one conductor to another is the plasma of an electrical discharge in the air. When we walk the streets of a big city in the evening and see the neon signs, we don't think about it that in every tube the plasma of the noble gases neon or argon shines. Every substance heated to a sufficiently high temperature changes into the plasma state. An ordinary flame has a certain electrical conductivity; it is - even if to a small extent - ionized, it is a plasma. "

Our technical age is inconceivable without plasmas. The chips in this and every other computer are etched with plasma processes, flat computer screens use plasma displays, gas lasers in which the plasma medium excites atoms or molecules are used in research, industry, medicine and environmental analysis. New materials are created with plasma torches. To solve the energy problems of future generations, the maintenance of controlled nuclear fusion is now within reach.

99% of the luminous universe is in the plasma state. It is the cold conditions on our planet that make the classical aggregate states appear "natural" to us.

All stars are plasmas because they are very hot, but the medium between the stars is also in the plasma state. This gas is so thin that even the weak starlight is enough to snatch one or the other electron from the atoms and thus lead to a noteworthy ionization. Even if there is only one ion for every 100,000 neutral atoms, the gas reacts to electrical and magnetic forces - it is a plasma. That is why plasma physics is considered a fundamental science for astrophysics.

So electrical and magnetic forces act in plasmas, which strongly influence the movements of the particles. The much lighter electrons can move quickly relative to the 2000 times heavier ions. As in metals, this leads to electrical currents, which in turn produce magnetic fields. Since the charged particles are bound to the magnetic field lines, tubes are created in which plasma flows.

This is especially nice to watch during sun outbursts. 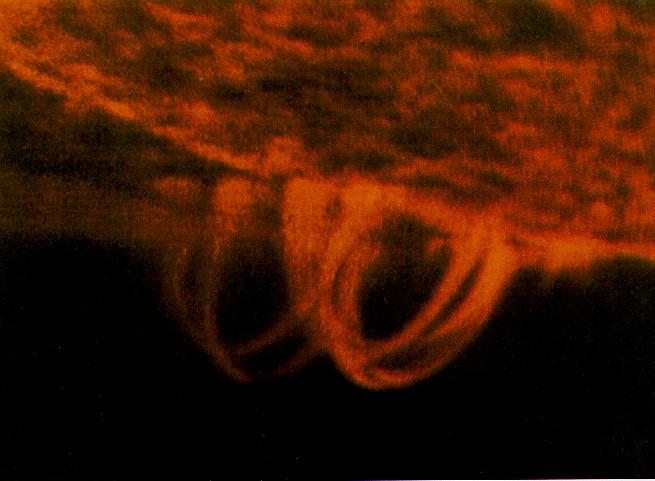 Like all stars, the sun is a plasma ball. Inside, hydrogen atomic nuclei are fused into helium at millions of degrees. The energy released is transported from the sun's core to the surface by radiation and plasma currents, where it is 6000 degrees and most of the atoms are ionized. Plasma currents break out of the surface and escape into space, creating magnetic tubes that bundle the plasma and accelerate it to high speeds. In this way, the sun blows a plasma wind at up to 600 kilometers per second. 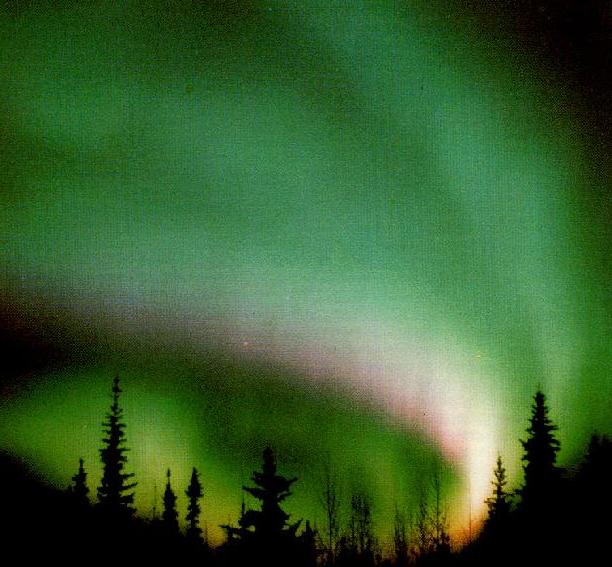 At the observatory we deal with very different problem areas from astrophysics.

As in the dynamo on a bicycle, an already existing magnetic field in galaxies is reinforced by conductor movements; electrical currents flow that are appropriately structured and maintain the magnetic field.

In disk galaxies, for example, the magnetic field lines reflect the spiral and bar structure.

Another aspect of our work is the acceleration of particles in electric fields. Whenever magnetic field lines with different directions meet, electric fields are generated.

Particles can be accelerated very efficiently along these fields. This process can be observed directly in the earth's magnetosphere, where it leads to the northern lights. The accelerated particles hit the oxygen and nitrogen atoms in our atmosphere, ionize them and stimulate them to produce the impressive luminous phenomena.

The collision of magnetic field lines with different directions can also be observed on the sun's surface. There, the release of the magnetic energy leads to huge eruptions and the acceleration of particles to very high energies and the heating of the solar atmosphere to several million degrees. The paradoxical situation that the sun's surface is only 6000 degrees hot while its atmosphere has gas that is millions of degrees can only be explained by the "invisible" energy transport of electromagnetic energy into the atmosphere.

In astrophysical systems, disturbed magnetic fields with different directions occur almost everywhere. Whenever an external force pulls, tears or presses the plasma, the magnetic fields are correspondingly disheveled or compressed and field lines with different directions meet. Depending on the respective magnetic field strength, very high particle energies can occur. We cover this process for the northern lights phenomenon in the Earth's magnetosphere, for the X-rays from young stars, and for the production of gamma rays in active galactic nuclei. There, in particular, the observed time scales of the radiation power require an efficient acceleration mechanism which, similar to solar flares, can accelerate many particles to very high energies in a short time.

In active galactic nuclei, plasma flows in a disk onto a black hole. 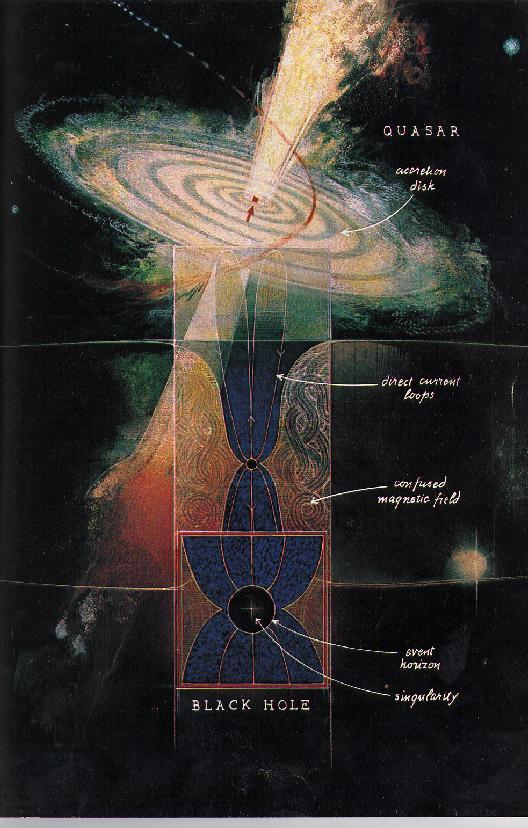 The kinetic energy that the gas gains when it hits the strong gravity field of the black hole is emitted in the disk. The disk, which has magnetic fields, is heated up and gigantic eruptions occur, during which magnetic energy is converted into particle energy. Strongly bundled plasma beams, the so-called jets, emanate from the black hole and extend over 100,000 light years. Here, too, magnetic fields play the role of the "prison guard", the plasma hardly comes out of the magnetron tube.

Huge amounts of radiation are also released by pulsars, our third focus. 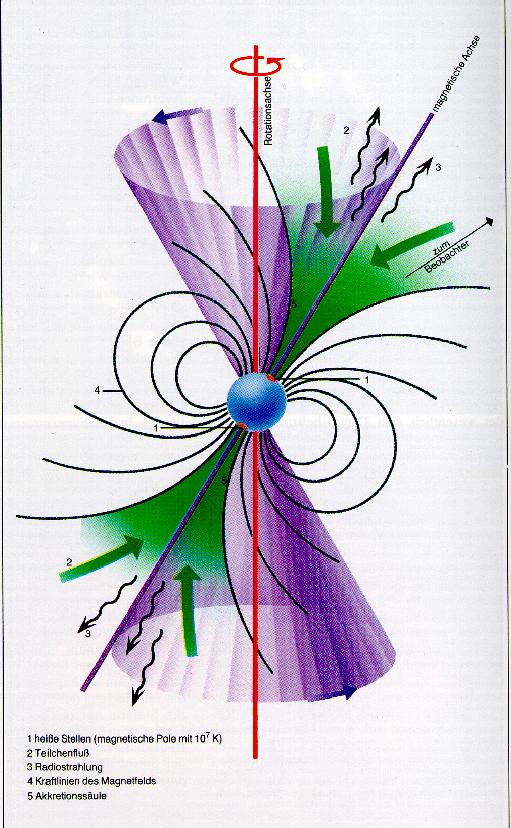 Pulsars are star corpses. They arise as the remnants of a supernova explosion when the nuclear fusion breaks off inside a star with a weight of several solar masses. Due to the lack of an energy source, the star's core collapses. The high pressure squeezes the electrons into the atomic nucleus and the union of protons and electrons creates a neutron star. This approximately 10 km large sphere remains as a remnant, while the outer star shells are blown off in a huge explosion. The small sphere contains up to 1.44 solar masses, rotates up to 1000 times per second and has a magnetic field that is a trillion times stronger than the earth's magnetic field and rotates with the star. Due to the high rotational speed of the star's magnetic field, strong electric fields are built up on the surface of the neutron star, which tear particles out of the star's surface. These flow along the field lines and radiate, especially in the radio range (100 megahertz to a few GHz). The light beam rotates like a lighthouse in the cosmos and whenever it cuts our line of sight we see the intense radiation of the neutron star - it pulsates, hence the name pulsar. Pulsars are so precise in their properties that one can calibrate the earthly atomic clocks with them.

A pulsar emits as much energy per second and per square meter as the earth will use in 10 billion years. The high intensity of the radiation requires a coherent radiation process in which all particles emit the same energy at the same time, similar to an earthly LASER.

At the observatory we are working on theoretical models for this radiation mechanism, which is still unknown today.