What is the deepest artificial hole

"Make-up" for the earth

Garzweiler I and II: 11.4 square kilometers (km2) area, in operation; Goitzsche: 60 km2 in size, closed; Dreiweibern: 35.8 km2, also closed. These are just three examples of lignite opencast mines that are changing the landscape in Germany permanently or that have changed it a long time ago.

Not only nature - meadows, forests or lakes including the native animals and plants - is affected, but also people. Because almost as long as the list of the displaced species is the list of the "excavated" settlements, as they say in technical terms.

In Lusatia, over 80 places and parts of the community have been victims of the opencast mines. And despite mass protests, Garzweiler, Lürken, Rundstedt or Markkleeberg, among others, had to give way to bucket wheel excavators in the Rhenish and Central German lignite mining areas - a list without end. Because the dismantling will continue in the near future. In Germany, lignite still plays a decisive role in primary energy generation and, last but not least, is abundant. According to the Federal Association of Lignite, there are still 40.6 billion tons of economically recoverable reserves dormant in the soil. 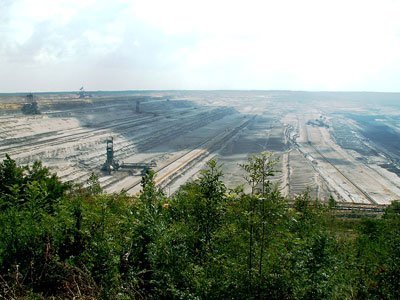 But in order to get to the coal seams, which are relatively flat under the earth's surface, the surface layer and thus the landscape must first be removed over a large area. Example: Hambach opencast mine in North Rhine-Westphalia. Located between Elsdorf, Niederzier and the Jülich Research Center, this is currently Germany's largest open-cast mine. The huge machines have already eaten their way here almost 400 meters into the earth.

The largest excavators in the world

No wonder, because the world's largest excavators work there: 240 meters long, 96 meters high and weighing 13,500 tons. They mine 240,000 tons of coal or rock every day. For comparison: a normal football stadium could be filled in 30 meters high. Every year 40 million tons of brown gold jump out for the operator, RWE Power. And that until 2040.

But the overburden in Hambach is also unimaginable. Almost 300 million tons of it are generated in the course of the year. A large part of it is then stored in an area of ​​the open pit that has already been “harvested”. Where bucket wheel excavators, conveyor belts and miners whirl around now, there used to be an extensive forest area, the Hambach Forest. In the meantime, large parts of the former 5,500 hectare area have disappeared forever. However, more than 5,000 residents of the open-cast mining region have already lost their homes. The villages of Etzweiler and Lich-Steinstrasse were completely relocated and were given a new home nearby - including social problems.

However, the open pit does not only have an impact on the operating area itself, but also on neighboring regions. Because the lignite is usually well below the groundwater level, it has to be pumped out constantly. Consequence: Sources in the neighborhood dry up, places and landscapes sag, mountain damage.

But why are opencast mines like in Hambach even approved in view of such disadvantages? This is made possible by German mining law, according to which mine ownership rests with the state and not with the landowner. In a ruling by the Higher Administrative Court for the State of North Rhine-Westphalia on December 21, 2007, the approval of the framework operating plan for the Garzweiler I / II open-cast lignite mine, which is associated with the resettlement of large numbers of people, does not fall within the scope of Article 11 Basic Law (GG) (right of free movement) or Article 2 paragraph 2 GG (freedom of the person); the resettlement is compatible with public interests within the meaning of Section 48 (2) sentence 1 of the Federal Mining Act. "

Hard coal from the New World

While in Germany only lignite is mined in open pits, things look very different in the USA, for example, due to different geological conditions. In the northeast of the state of Wyoming, in the Powder River Basin, there are particularly rich hard coal deposits near the surface. Some of the huge coal seams are more than 50 meters thick and up to 66 million years old.

Coal mining is therefore mostly carried out in open-cast mining there. One of the largest coal mines in Wyoming is the Peabody Energy’s North Antelope Rochelle Complex, which can even be easily seen from the International Space Station (ISS). The coal seams can be seen as thin black lines in the open mines.

Sometimes they are bigger, sometimes a little smaller: Huge pits arise when many raw materials are extracted. But what actually happens to the many holes that have been created? Or with the masses of worthless and disruptive overburden?