They appear in every tax return and are easily mixed up. It is important to understand the tax differences between revenue, income and income. The order in which they are calculated by the tax office is also decisive. This is the only way you can understand how the tax authorities calculate your income tax.

In the following we roughly explain the terms and show you the steps in which the tax office proceeds when calculating your income tax:

At the beginning of the tax calculation there is your income. Income includes everything that you have taken in the corresponding calendar year. If you are an employee, your gross salary usually makes up the largest part of your income. However, the tax authorities also add various pensions, for example for occupational disability or reduced earning capacity, as well as widow's or orphan's pensions. What many do not have on their radar: The income also includes benefits in kind, for example board and lodging, or benefits in kind, such as a company car that is used privately.

Income is the amount that remains when you deduct expenses from income. For employees, this means that you can state all costs related to your job in your tax return. Your travel expenses as well as the costs for specialist books, training courses or work clothing are part of the so-called advertising costs.

In principle, the tax authorities take into account a so-called income-related expenses allowance of 1,000 euros per year for each employee, which is automatically deducted from your income. If you have higher expenses, you should state them in your tax return and prove them accordingly. Only then will the tax office recognize the costs and deduct them from your income.

There are seven types of income in tax law:

3rd step: Calculation of the "sum of the income"

Often a taxpayer not only has income from one of the types of income explained above, but also from other types of income. For example, an employee rents out an apartment or leases a piece of land. In addition, some of his money lies dormant in stocks. In this case, the tax office adds the income from the three types of income. That means: The income from employment, from renting and leasing as well as from capital assets together result in the so-called "sum of income".

The income from the seven different types of income add up to the sum of the income.

4th step: Determination of the "total amount of income"

Depending on your personal situation, allowances are deducted from the total income.

The total amount of income is the sum of income minus certain allowances.

In the case of married couples or registered partners who are assessed together, the tax authorities initially determine the income separately from each other. In the next step, the tax office adds up the separately calculated income to a total amount of income.

Income is the total amount of income minus special expenses, extraordinary burdens, losses and other amounts.

With the last step - the determination of the taxable income - the goal is reached. Taxable income is the amount that is left over from your earnings at the end of the day. You only pay taxes on that. Therefore, the more costs you claim, the less tax you have to pay.
If necessary, the tax officer deducts additional allowances from the determined income:

The taxable income is the income minus the child allowance and hardship compensation.


Our infographic offers you a clear summary: 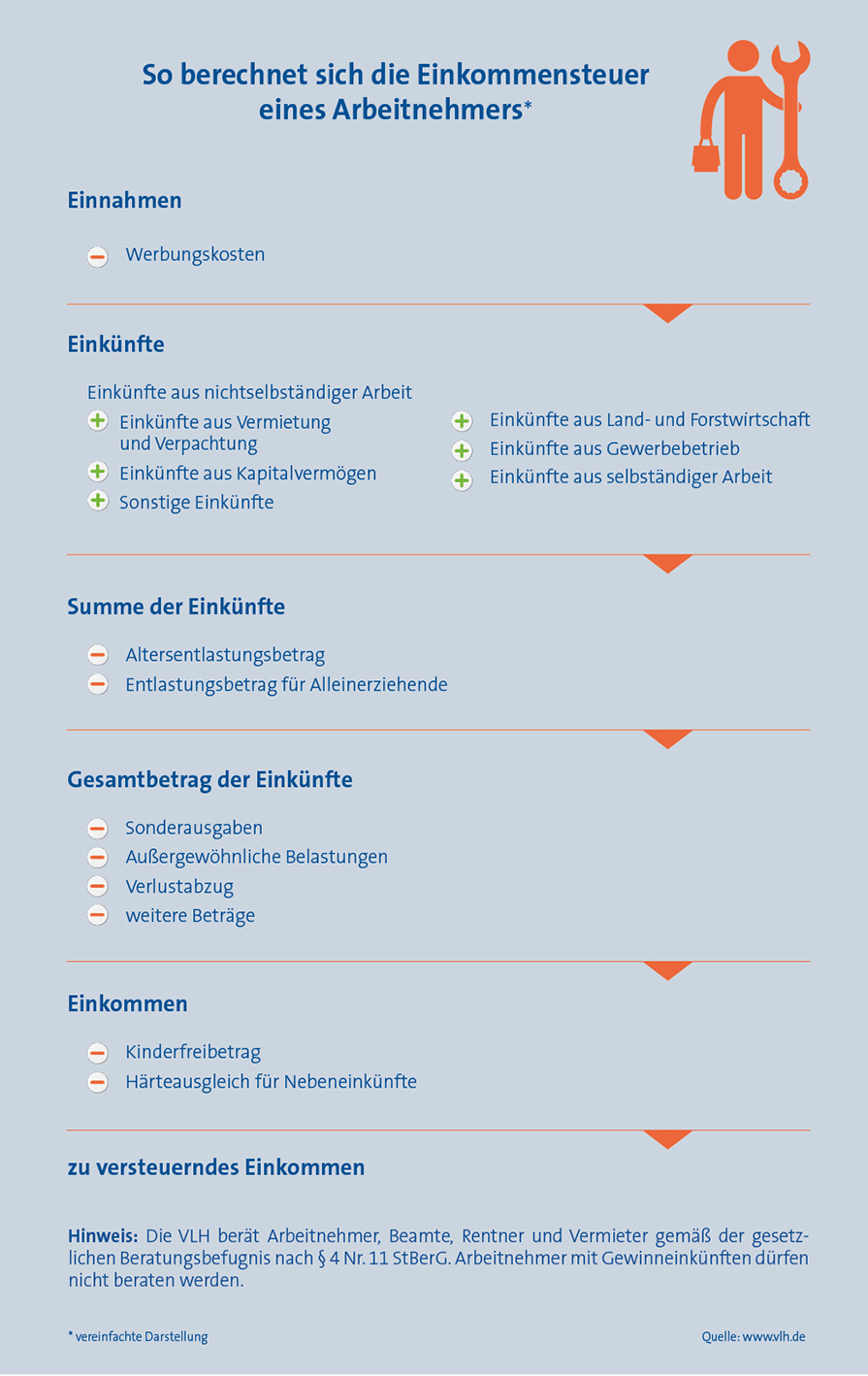 The following example shows how your income tax is calculated:

Manuel works as an electrician for a large household appliance manufacturer. He is single and earns 28,800 euros a year. Since he lives in the country, he commutes 40 kilometers a day to work on the outskirts of the city. In addition to his wages, he has other income. Manuel has inherited land from his grandparents, a field and a meadow, for which he receives 700 euros in lease income per year.

In addition to his statutory share of old-age provision and health insurance, Manuel has also taken out private insurance, for example private liability and private disability insurance. From a tax point of view, these regular expenses are special expenses. For his 2019 tax return, Manuel can claim 5,300 euros for his old-age pension. In addition, the tax office recognizes 100 percent of its contributions to statutory health and long-term care insurance. He can also deduct his private insurance: With this he reaches the deductible upper limit, which is 1,900 euros. Since Manuel has no children and there are no other special features in his personal situation, he cannot claim any additional allowances or other deductible amounts.

To calculate his taxable income, Manuel's tax officer does the following:

Manuel has an income of 28,800 euros a year, but he only has to pay taxes on a much lower amount, namely 14,860 euros a year. This sum is his taxable income.

Are you considering which advertising costs and other allowances you can use to reduce your tax burden? Our advisors will be happy to help you. Find a consultant here.

This is an editorial text from the VLH editorial team. There is no advice on topics that are outside the tax advisory powers of an income tax aid association. Consulting services in specific individual cases can only be provided within the framework of the establishment of a membership and exclusively within the advisory authority according to § 4 No. 11 StBerG.