YTBT2021, YT1TM2020, YT1TQ2020, RP4F2020 - such strange codes have appeared again and again in the top comments under popular YouTube videos in recent months. Behind this is a clever method used by semi-silly affiliates to generate traffic and earn money - in the end mostly through the sale of ringtone subscriptions. OMR shows exactly how it works.

"Every bum goes to Playboy before me, like Charlie Harper, but is bankrupt and has to push stones like Ali Baba," raps Shirin David in her latest track "Babsi Bars". The accompanying music video is number 1 on Youtube's German trending charts. Uploaded just two days ago, the video has already accumulated 1.4 million views.

The greed for free vouchers should let the brain suspend

In the comments below the video, it is apparently clever digital businessmen who “push stones”. Until yesterday, various of the top comments under the video revolved around a strange sequence of letters: "You have to google YT1TM2020 fortunately in time" - 216 likes. "You have to google YT1TM2020 today" - 146 likes. "Comments are correct, google it: YTBT2021 better now before it's too late" - 27 likes.

Examples of frequently liked comments under Shirin David's video for “Babsi Bars”. In the meantime, the comments have apparently been deleted.

If you enter the mysterious codes in Google's search box, you will come across sites like YTLoot.com or YTKode.com on the first search result. There, visitors are offered free vouchers for online shops such as Amazon or platforms such as Netflix or Steam. 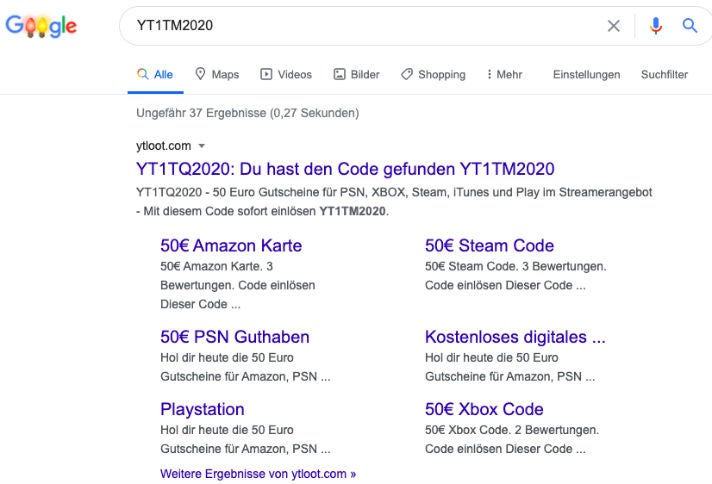 Number 1 on Google? Easy to use with self-created keywords ...

The scam is as simple as it is farmer-smart: The likes are probably generated on the comments by bot accounts. Due to the many likes, the comments are displayed high up in the comments column. Due to the strange code in the YouTube comment with lots of likes, the operators of the websites pinch off some of the attention for themselves (after all, hip rap videos quickly generate six- and seven-digit views in a few days) and generate curiosity among the video viewers.

The comments are more difficult to prevent by YouTube's spam mechanisms, as the codes can be changed again and again. And because users who have become curious and enter the code on Google, there are almost no competing search results. Because there are no other websites on which the codes appear, it is easy for the respective website creator to rank first for this keyword with SEO measures.

Anyone who clicks on one of the offers on the website must first watch a video in which the exact procedure is explained. To ensure that each participant only receives one voucher, it is necessary to provide a cell phone number. Then you get an SMS that you have to enter on the linked website. It is true that there is talk of a payment. But, so the original sound: "The five euros costs do not arise. You don't have to pay anything for this, because the first 14 days are always a trial period. ”Whether that is really the case - doubtful. 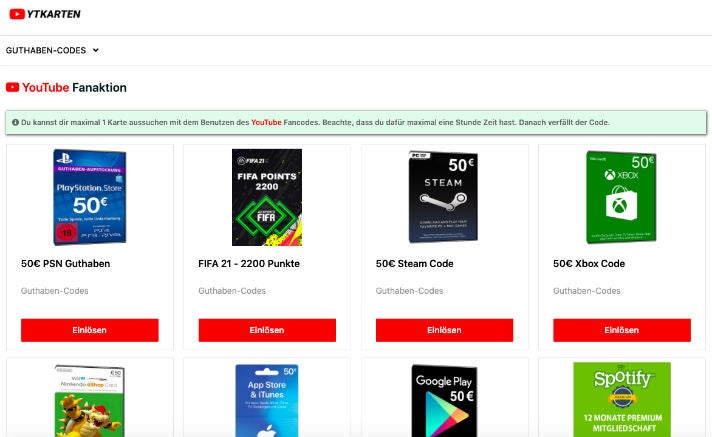 The home page of YTLoot.com. Anyone who clicks further apparently ends up in a mobile phone subscription rip-off model.

After the video, users are redirected to websites where they can take out a subscription on their mobile phone. In our tests, these were several different pages. What the subscription is for is not at all clear - they are talking about "access to applications".

Traffic is masked with redirects

Probably there are affiliates behind the scam, who receive a commission for each subscription concluded. This is also indicated by the tracking codes in the URLs of the landing pages, which are used in affiliate marketing to track which affiliate brought the new customer to the page.

Through the multiple redirects via different websites (including the domain "protectedlanding.com"), the affiliate probably wants to try to disguise the origin of the traffic. Because if one of the users complains that a ringtone subscription has been imposed on the publisher with false pretenses, there is at least the risk that the provider of the mobile phone subscriptions will block the affiliate and withhold his commissions.

Dozens of websites with the same scheme

If you google for “code youtube comments”, you will come across various evidence that affiliates have been trying this scam for months to earn money in a dubious way. For this, the creator (s) apparently operate a jumble of websites that all look more or less the same: ytkode.com, gabe.com, kartengratis.com, lootkarten.com, kartenluchs.com, ytkarten.com etc. etc.

The pages usually either have no imprint or one that obviously contains incorrect information - from an address in Romania to that of a truck parking lot in Bamberg. The owner of the domains cannot be determined either, because the operator (s) are concealed by appropriate domain privacy services.

In the spring, a dubious website under the Raetselfreunde.com domain had already implemented a similar scam. There, however, the users still had to solve a riddle and invite other participants via WhatsApp - in order to increase the reach of the campaign. Here, too, there was a subscription trap at the end. Even a chip and a computer picture reported on the half-silk website - and so they might even be able to access part of the traffic of those users who had googled for the code “RP4F2020”.

As dubious as the method is, it once again impressively demonstrates the potential for attention and reach of YouTube comments. In 2018, two affiliates had already told OMR how they generated attention for their affiliate page with comments under hip-hop videos on YouTube, on which they had compiled and linked outfits of rappers in the respective videos.

At the end of 2019 and beginning of 2020, fans of the German rapper MC Smook gave the impression, among other high-reach YouTube videos, that the international stars appearing in the videos (including Billie Eilish and Drake) were fans of MC Smook. In this way they generated views for his video for the song "Wasser". "That brought me 5,000 views a day," the German rapper told OMR at the time.

Thanks to Ravi Deient for pointing this out!