What's in the empty space

Is the empty space full?

The vacuum of space appears to us to be the epitome of emptiness: no air, no matter, no energy - nothing. But this impression is deceptive - and forms the basis for two different explanations of dark energy: the vacuum energy and the quintessential field. 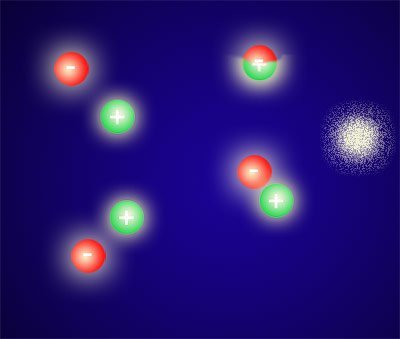 According to quantum theory, virtual particles are constantly emerging even in apparently empty space, which mutually cancel each other out again. © Podbregar

The first approach comes from quantum theory. According to the classical view, the vacuum is the lowest energy state, quasi the zero line of the cosmos. But in terms of quantum physics, even the vacuum still contains minimal energy, generated by fluctuations on the quantum level. These in turn lead to virtual particles being created again and again in the vacuum. These pairs of particles and antiparticles appear suddenly, only to be extinguished a fraction of a second later. Their existence is far too short to be measured.

“Nothing is therefore fuller than the quantum vacuum, its fluctuations contribute fundamentally to the values ​​that we observe and measure,” explains Joan Solà from the University of Barcelona. And similar to what the cosmological constant requires, this vacuum energy is also an intrinsic property of the space itself. It is therefore equally strong everywhere and does not change over time. According to some physicists, this vacuum energy could therefore be exactly what drives the expansion of space - the dark energy. 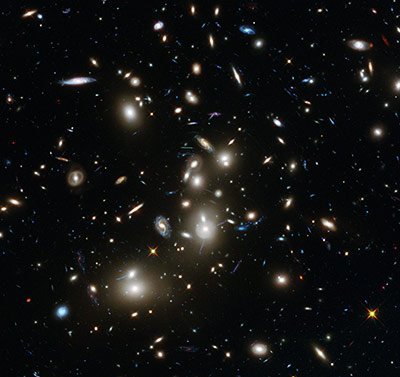 Galaxy cluster Abell 2744: In the early universe there was much less empty space between it and other clusters © NASA / Hubble

And it could also explain why the accelerated expansion only began a few billion years ago: In the early universe, matter was much more densely packed than it is today, so there was much less free space between the galaxies and galaxy clusters. As a result, there was also less vacuum energy in relation to matter. As a result, the effect of gravity dominated and caused a slow expansion. In the meantime, however, the universe has expanded and with it space and with it the source of vacuum energy. As postulated for dark energy, it therefore gained the upper hand and now has an accelerating effect on cosmic expansion.

So far, however, there has been a crucial problem with this model: If physicists calculate how high the vacuum energy could be, then they arrive at values ​​that are gigantic 10 to the power of 120 times higher than anything that comes into question for dark energy. Quantum theory has not yet been able to explain or eliminate this discrepancy.

At least the physicist Lawrence Krauss from Arizona State University and his colleagues see an opportunity to do so. Because he suspects that scalar fields like the Higgs field could be an important influencing variable for the vacuum energy. Their interactions could ensure that ultimately exactly the amount of energy is produced that corresponds to that observed as dark energy.

"Our calculations demonstrate that this very small amount of energy can be generated by just a small extension of the standard model of particle physics," says Krauss. But he sees this only as a first step to get closer to the secrets of dark energy. Even that is still a long way from proving that vacuum energy is the cause of dark energy.