First, let me introduce you to the passive settlement that is best for beginners. For this we need a nest box that offers the bumblebees optimal conditions for their nest building and the bumblebee colony. The living conditions of the different species must be considered.

In February, when the last frosts are over, the nesting box is set up in a sheltered place by the house or in the garden. Bumblebee queens look for holes and cracks on the ground where they suspect a nesting opportunity. For this reason, it is advantageous if the entry hole is very close to the surface of the earth. 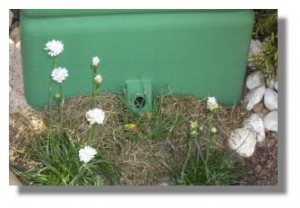 With a little luck, the bumblebee queen will find the entrance and investigate the passage that ends in a small cave made of upholstery wool or kapok. Now it depends on whether the queen likes it or not.

If she comes out again and does a so-called orientation flight after the visit, i.e. she looks in the direction of the entrance and flies first small, then increasing loops, it is a good sign.

This is how she memorizes the entrance and will in all likelihood come back. If she then enters nectar and pollen into the nest box in the following days, the nest has been successfully established.

Fundamental things have to be observed when actively settling.