Why did you start playing D D?

Nico Klöpper is returning to Leipzig from Dresden 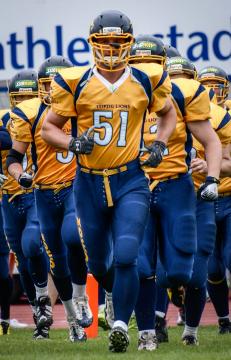 After Nico Klöpper reached the semi-finals of the German Bowl with the Dresden Monarchs last season, he is returning to the Leipzig Lions for this season. This not only pleases the new coaching staff, who will be officially presented in an open team meeting on February 2nd, but also their teammates. In an interview he revealed what he experienced last year and why he is returning to Leipzig.

You will play in Leipzig again in 2013, what did you do last season?
Klöpper: Last season I decided to join the Dresden Monarchs in the 1st Bundesliga in order to develop myself as a player. It was a great experience. In addition to the International Bowl against the Obic Seagulls in the Dynamo Stadium in front of almost 7000 people, it was also the best season for Dresden so far. Unfortunately, we didn't get past the semi-finals.

How has your previous football career been? How did you start and what have you been doing so far?
Klöpper: As with every athlete, probably with ups and downs, with the highs predominating (laughs). After years of trying my hand at various sports, including handball, hockey, floorball, basketball and streetball, although I got stuck with the latter for a long time, at some point I came to a point where I wanted to use my body properly. In 2003 my mother worked in the same shop with Frank Frommhold. I then talked to him and he called the youth coach of the Leipzig Lions. Then I went to my first training session with the youth and I was immediately drawn to the sport. Since then he has become an integral part of my life. I then played youth and state youth selection for 18 months before I went up to the men.

Why did you decide to play for the Leipzig Lions again?
Klöpper: A new job no longer gave me the opportunity to continue commuting to Dresden or to invest the time I needed to survive there. Dresden was an unbelievably great experience, but it also involved a lot of sacrifices. This would not have been possible without the support of family and friends. I then sought a conversation with some of my former comrades. Among other things, with Chris Herzberg, with whom I played together when I was young and made various trips in connection with football. He told me that he wanted to play with the Lions again, too.

What is your goal for the 2013 season?
Klöpper: To tackle every game step by step and to show the fans a good game.

What are you looking forward to this season?
Klöpper: To my tenth season and that I will contest it with my boys.

Will you also coach in defense and will you take on the position of defense captain again?
Klöpper: If it is possible I would like to train the D-Line again and the team should decide about the Defense Captain. But I am happy to take on this task.

From now on Nico Klöpper will be playing for the Leipzig Lions again. (© Naujocks / Lions)