Can you believe the Bible?

Searching for Truth in Faith: The Bible? Fake news!

The Bible is not a history book. Nevertheless, the truth is sought again and again in it. Anyone who does that can really only fail. 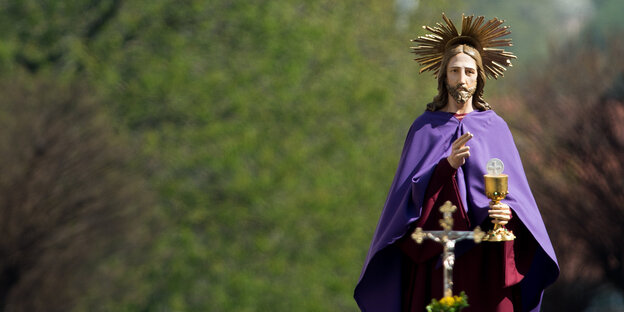 If the Bible is as true as a love letter, are processions out on dates? Photo: dpa

“What is truth?” With this question, probably meant cynically, the Roman governor Pontius Pilate dismisses the poor traveling rabbi Jesus of Nazareth in his rebellious province, who says he is a king. Jesus thereby undermines the authority of Rome, even if he emphasizes at the same time that his kingdom is not of this world. But Jesus' words are enough for Pilate.

He has him crucified, that is, tortured to death. The Evangelist John describes this dialogue in the palace of Pilate 2000 years ago. And also the words of Jesus before: “I was born for this and came into the world that I should bear witness to the truth. He who is from the truth hears my voice. "

The question of truth is central to the New Testament - and it is life-threatening. The evangelist John was not present at the interrogation of Jesus by Pilate, he wrote this dialogue about sixty years after the event, and whether there was any dialogue between the Roman governor and Jesus of Nazareth is very questionable.

But if we today could ask the evangelist John Pilate's question “What is truth?”, He would probably not understand it at all.

June 2nd, 1967: One shot kills the protester Benno Ohnesorg. This date marks the beginning of a debate that continues to this day about the counter-public, about the media, about truth and lies, or, as one would say today, about fake news and alternative facts, about conspiracy theories, bourgeois newspapers and alternative (also right-wing) newspapers, about the "truth" and the authority to interpret social developments. Thinking about 50 years of the counter-public: against the currentThe special editionagainst the current - now in the taz shop and at www.taz.de/gegenoeffentlichkeit

Because the Bible is not a history book. And to ask them the question: “What is true of this? What really, really happened to it? ”- this question is a very modern one. The evangelists wrote their stories about Jesus not as historians, but as heralds or, to put it more wickedly, as propagandists. And they had another, shall we say, ancient concept of truth.

Truth was what they believed was true, what served the faith and their community. They stuck to "alternative facts", which would again be quite modern. "Credo, quia absurdum est" - "I believe because it is inappropriate (or absurd)." The ancient Christian writer Tertullian said something similar about 1800 years ago and before that Paul said.

So anyone who thinks the Bible is a collection of fake news is not completely wrong. Central passages of the Old and New Testaments are simply not true, at least not in the historical sense: Adam and Eve never lived, Moses and the exodus of the people of Israel to the Holy Land are most likely narratives of a priest caste, probably originating in the decades between around 520 and 450 BC BC, as Jan Assmann has proven - the historical content: minimal. The conquest of the Chosen People in today's Israel was evidently far less bloodless than the holy books depict, Jesus was probably born in Nazareth, not in Bethlehem (and not in the stable for a long time) etc.

What is true about it? What really, really happened to it? - this question is a very modern one

Anyone who reads the Bible with today's eyes will not reasonably believe that Jesus said just that and performed this very miracle. As early as 1941, the Protestant theologian Rudolf Bultmann summed up this knowledge as follows: "You cannot use electric light and radio, in case of illness you can use modern medical and clinical means and at the same time believe in the world of ghosts and wonders of the New Testament."

Sympathetic skepticism - even in the Bible!

According to Bultmann, we no longer have the mythological worldview of the New Testament, but a scientific one. Jesus was (only) “risen into the kerygma”, that means: We can only recognize the historical Jesus and his deeds through the mirror or distorting mirror of the faith of the early Christians who wrote down the Gospels. More is not possible.

This is of course a problem for all who believe - and it affects not only details, but also the central belief of Christians, the resurrection of Jesus. When the women in Jesus' community talk about her, the apostles do not believe them at first that it is "chatter" (Luke 24:11). A very sympathetic skepticism.

But then, if one believes the Gospels, encounters and experiences take place that surprise the apostles - and convince them. The apostle Thomas wanted to put his fingers in the crucifixion wounds of Jesus before he believed in the resurrection, others only recognize the resurrected one when he breaks bread with them: Sometimes the resurrected Jesus appears to them as spiritual, sometimes as very physical, for example as one who eats and drinks.

That sounds a lot like fake news. But here too the search for historical truth fails. It is precisely at this point that security from the believer's point of view is so important. “But if Christ is not risen, our sermon is in vain, and your faith is also in vain,” Paul wrote a good 1950 years ago.

As true as a love letter

The apostles were ready to devote their whole life to spreading the faith in the risen one, even going to their death for it if necessary. This suggests that this belief is seriously true for them. Again, the truth is a matter of life and death. But this does not prove anything. And there is even less evidence of the existence of God. The fact that one cannot prove one's nonexistence is little consolation for those who want to combine faith and reason.

Belief is not a very sane thing - and the Bible and its stories are closer to fake news than the truth, if they still exist in postmodern times. There is only one “hold-to-be-true”. And that has a lot to do with feelings: a sense of closeness, a sense of love, a sense of communication with what Christians call God.

The Bible is most likely as true as a love letter or love song is true. Of course, my love for this one person is not as wide as the ocean and as high as the sky, and I probably wouldn't go a thousand miles to see her or him after all.

But there is still truth in these sentences, and maybe not just a grain. Seen in this way, the Bible is not a collection of fake news, but the sometimes poetic, mostly bumbling attempt by many generations of people to put into words what they experience or feel as God's closeness.

If we understand God as something that far exceeds our small, limited human thinking (and nothing else would be sensible in view of the size and complexity of the universe), it is not surprising that the human talk of God in the Bible also has something to do with it - Has something sensible or even crazy. According to the well-known phrase: I cannot believe in a God I can understand.

The Bible may therefore be nothing but fake news for very many. But it's divine fake news. You are as true as love.