What is fast food

The doner kebab is also part of the fast food. The word comes from Turkish and means something like "rotating grilled meat".

The word fast food, read: Faast-Fuud, comes from English and means "fast food". Fast food includes dishes such as bratwurst, french fries and hamburgers. The food is fast because you get it very quickly after ordering.

There was such a thing as fast food a long time ago, in ancient times. People were sold hot food from stalls on the street. The word fast food has only been around since 1950, when there were a lot of fast food restaurants in America.

Where do you eat fast food?

You can get fast food at stalls on the street, for example. Some stalls have wheels: a food truck is a kind of small truck with a counter. You eat fast food standing up in front of it or take it with you on the way. Some people don't like fast food because they prefer to eat together at the same table.

You can sit in a snack bar or in a fast-food restaurant. A snack bar or chip shop is rather small: in addition to the counter with the food and the cash register, there are also a few tables and chairs there.

So-called fast food restaurants are bigger: you usually get your food faster than in a restaurant because you are not served at the table. You order your meal at the cash register and take it to the table yourself. The food is received quickly because it has often been prepared in advance. In some fast food restaurants, the food is waiting a long time before it is sold.

Some stalls or restaurants offer that food can be ordered. Customers call from home or place an order on the Internet. You can either pick it up yourself and therefore don't have to wait in the restaurant. Or the food is brought to your home. Sometimes that costs a little extra.

However, there is also fast food in “real” restaurants. In some it is intended for children who may not like a “real” dish. Some expensive restaurants offer typical fast food in a special way: They use fresh ingredients, good meat and prepare everything in a sophisticated way. 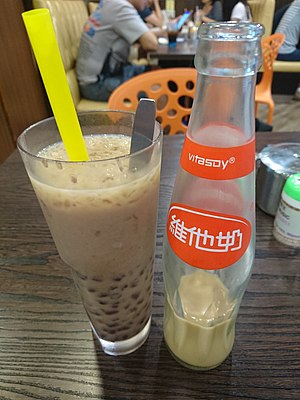 In Hong Kong and elsewhere in Asia, people like to drink soy milk with ice. Down here in the glass you can see red beans. However, this drink is not very healthy because it contains a lot of sugar.

In the fast food kitchen, no or almost no fresh food is used. Instead, you take food out of the freezer. Together with oil, the food is then warmed up on a grill or in a deep fryer. Fryer is the name of the device in which French fries are also made. The excess of fat can make you fat.

In addition, fast food doesn't keep you full for long, so you want to eat more of it. Hence, many people say that it is unhealthy. Some also call fast food junk food, in other words: Dschank-Fuud, which means something like "rubbish food" in English.

Some fast food vendors say they make their food healthier. It then contains less sugar or fat than usual. Nevertheless, there is often still a lot of sugar and fat in it. In addition, not all dishes are “healthy”, so customers have to be careful what they are actually ordering.

Why are many people against fast food?

Fast food is often sold in paper or plastic packaging. The cutlery is also made of plastic. Because it is only used once, there is a lot of waste per meal. This applies to both eating in the fast-food restaurant and ordering home.

Many takeaways and fast food restaurants belong to one large company. Well-known are, for example, McDonald's, Burger King and Kentucky Fried Chicken. This is called a chain or a franchise, i.e. Frän-Tscheis. A single store has a single owner. But he has to adhere to the company's rules and pay money to use the company's name. The many people who work in the individual restaurants are also not always well paid.

There are also other search results for “Fast Food” from Blinde Kuh and Ask Finn.

The Klexikon is like a Wikipedia for children and schoolchildren. The most important things explained simply, with definition, many pictures and maps in over 3000 articles. Basic knowledge suitable for children, everything easy to understand and good for presentations in school.
<?