Rare picture in the US Congress: Democratic MPs have backed up their call for stricter gun laws with a 26-hour sit-in. Rep. John Lewis demanded that the House of Representatives finally put a vote on a legislative initiative.

How many more tears need to flow?

According to the will of the Democrats, it should stipulate that someone who is on a terrorist or no-fly list may not buy a weapon. "How many mothers, how many fathers will have to shed tears of grief before we do anything?" Said Lewis. The 76-year-old is a well-respected member of parliament who is sometimes referred to as the "conscience of the US Congress". In the early hours of the morning, however, the sit-in came to an end without a corresponding vote

The call for a tightening of the gun law has become much louder again after the attack in Orlando, in which 49 people were shot. So far, however, there are no new laws in sight: it was not until Monday that several bills for stricter regulation in the Senate - the other chamber of Congress - failed. Republicans have a majority in both houses of Congress and can block President Barack Obama's Democratic initiatives.

We would win the vote

The Democratic group leader Nancy Pelosi justified the sit-in as follows: "Our MEPs sat on the floor to protest that we could not even hold a vote. We believe that we would win this vote."

Paul Ryan, chairman of the House of Representatives and Republican, however, let it be known through a spokeswoman that the chamber could not work if MPs did not obey the rules. He himself later called the protest a PR campaign. The Democrats are only concerned with the headlines, he told CNN. 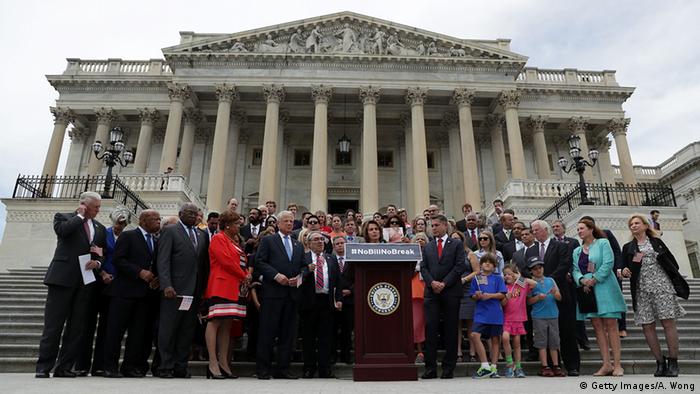 Inside there was a sit-in of the Democrats, in front of the Congress, parliamentary group leader Pelosi commented on the action while standing

US President Obama also intervened in the debate. Through his spokesman, he let it be known that the actions of the Democratic MPs reflected the frustration and anger of many people about a republican blockade stance. Your concern is neither controversial nor radical. They would simply campaign for a bipartisan consensus to vote on a policy for which there is a large majority in the country. Obama thanked MP Lewis for the action via Twitter.