On July 30th, the NASA rover “Perseverance” will take off for Mars. This is the third Mars mission in a few weeks. Read here why the Red Planet 2020 is so popular and which nations are exploring Mars this year.

Mars will attract many nations in 2020. (Symbol image)

China launched its probe on July 23 "Tianwen-1" sent on the way to Mars. On July 30th the Mars rover "Perseverance" from NASA to the Red Planet. The United Arab Emirates previously sent the first Arab Mars probe into space. But it shouldn't land. What about the ambitious Mars missions?

A successful landing on Mars is one of the most difficult missions in space travel. Since 1960, people have tried to fly past or land on Mars. The Soviet Union sent a launcher to Mars in 1960. But 40% of all previous Mars expeditions failed.

In 1964 NASA managed to take the first pictures of the Red Planet in a flyby. In 1967 the US space probe "Viking-1" landed on Mars. The probe remained in operation until 1980. In total, she delivered 37,000 recordings.

Why is it so difficult to land on Mars?

The planet has a low atmospheric pressure, so space probes fall to the ground very quickly when they land. Strong braking is necessary. Due to the great distance, this process cannot be controlled from the control center on earth. The spacecraft must make a clean landing by itself.

The United Arab Emirates are now among the nations that have sent a space probe to Mars. On the night of July 20th, three days before China left "Hope" up. The probe carries the Arabic meaning for hope "al-Amal". The Japanese spaceport Tanegashima served as the starting point. The start of Hope had to be postponed twice due to bad weather conditions.

Hope is the Arab country's second space project recently. In September 2019, an astronaut from the United Arab Emirates flew into space for the first time and spent a week on the International Space Station.

The space probe is to analyze the atmosphere of Mars from a distance of 20,000 to 43,000 kilometers. Above all, the focus is on the weather, because Hope is supposed to track the weather for an entire Mars year. That corresponds to about two years on earth. Hope is equipped with cameras and spectrometers for this purpose. The Arab space engineers are interested in information about the CO2 cycle in the atmosphere or dust storms.

The Chinese engineers failed a first attempt in 2011. Back then, a piggyback flew on the Russian Fobos-Grunt probe. But the spacecraft and the rocket did not go out of orbit.

Tianwen-1 is now China's second attempt to send a probe to Mars. China relies on its own technology, an orbiter and a rover to Mars. The orbiter will map the rocks on the Martian surface from an orbit, search for water ice deposits and measure the Martian magnetic field.

The launch vehicle of the new type "Long March 5" took off on July 23 from the space station in Wenchang on the southern Chinese island of Hainan. China has already successfully landed two rovers on the moon. So far, the United States is the only nation that has made multiple soft landings on Mars.

In February 2021, the spaceship is expected to reach Mars 55 million kilometers from Earth. You can see the start of Tianwen-1 again in the video here:

The name Tianwen-1 can be translated as "questions to heaven" and comes from a poem by one of the greatest Chinese poets, Qu Yuan.

"I think China can do it like anyone else, but Mars is a challenge," said Australian expert Morris Jones of the German Press Agency.

"Mars has a very thin atmosphere, which means the parachutes don't slow down as much as they need to," said Jones.

The gravity and atmosphere of Mars are tricky, says Norbert Frischauf, space expert at the consulting firm SpaceTec Capital Partners in Munich. The chances of a successful landing are 50%.

“It's like going to the casino and betting on red or black,” says Norbert Frischauf.

Since Mars has an atmosphere, a heat shield is necessary. The Chinese lander will use the rocket nozzles and a parachute to hover about 100 meters above the surface and explore the best landing site. The landing should therefore only take place two to three months later.

Perseverance takes off from Cape Canaveral

On July 30th, the time has come: The Mars rover Perseverance (German: Perseverance) sets off on its mission to the Red Planet. Weighing 100 kilograms and the size of a small car - this is the data that defines Perseverance. It is said to be the largest rover that the US space agency Nasa has ever shot to Mars. We have written more about Perseverance here. 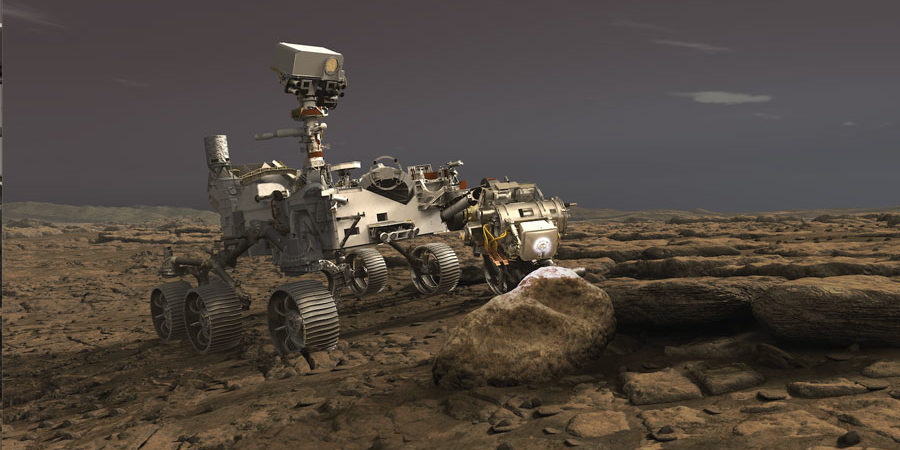 On the Mars 2020 mission, the Perseverance rover searches for traces of ancient life on Mars.

The Mars rover takes off in the US state of Florida on board an Atlas V rocket. He should look for traces of microbial life and explore the climate and geology of Mars. The scientists have chosen the Jezero crater as the landing site. It is a river delta that dried up three billion years ago. The crater is 45 kilometers wide.

“For me, that's the most exciting part of the mission: landing in the river delta that looks so promising. We don't just want to see pictures and get numbers, we want to evaluate samples in the best laboratories that are available to us - here on earth, ”says Thomas Zurbuchen, Science Director at NASA.

The Mars rover is supposed to take soil samples and pack them in small tubes, a kind of machine researcher on Mars. These samples should be brought to earth in one piece. So Perseverance has a very important mission. The new rover not only has 23 cameras on board, but also two microphones that are supposed to record sounds. We may soon be able to hear what Mars sounds like.

Live stream from NASA for the start of Perseverance

NASA will stream the start live on July 30th. Here you can be there when Perseverance goes on the long journey.

The exploration of Mars has been ongoing for many years. Now NASA has published new high-resolution panoramic images of the red planet.

The textures in the center of this image were formed by water billions of years ago. NASA's Curiosity Mars Rover discovered them when it climbed the slope of the Greenheugh gable on February 24, 2020.

The older Curiosity Rover, which was sent to Mars by NASA in 2011, is far from obsolete. To the other photos.

Why do so many nations want to go to Mars now?

In July and August, Mars is closest to Earth (98 million kilometers). This constellation only occurs every two years. The closest approximation of around 55 million kilometers occurs even less often to wait for it (only every 18 years). The two planets are currently in a favorable position to each other until mid-August. The journey to Mars takes between six and ten months, depending on the severity and complexity of the spacecraft.

All three spaceships should be on Mars in February 2021. "The fact that three missions use the current time window is actually a lot," says space travel expert Eugen Reichl. In the long term, all countries are probably pursuing a common goal: that at some point people will be able to set foot on the soil of the Red Planet.