What is the oldest known song 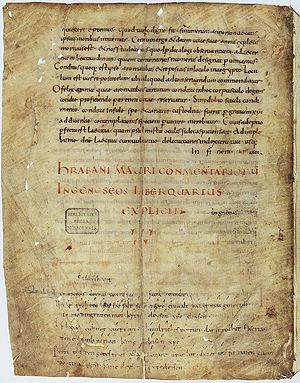 The Freising Petruslied. The Genesis commentary by Hrabanus Maurus (d. 856) ends on the page. At the bottom of the page is the Peter's song as an addendum. "Neumes" are written above the lines of text, indicating the course of the melody. (BSB Clm 6260, fol.158v) 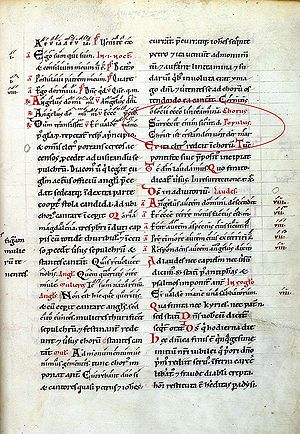 The oldest testimony for "Christ is erupt" in a Salzburg manuscript around 1180/90. It is about the "Liber Ordinarius" of the Salzburg Cathedral, i.e. the order of worship. Only the beginning (incipit) of the song (with neumes) is recorded, preceded by the word "populus" (people) as a reference to the performer. (Salzburg University Library, M II 6, fol.67r)

Medieval sacred songs are vernacular chants that were sung during worship or devotions, but without having a permanent place in the Latin liturgy. They were typically heard at sermons, on pilgrimages or at special devotions in the Christmas and Easter festivities. Since they often end with an Eleison acclamation, sacred songs are also referred to as "leis". The oldest known example of a sacred song from Bavaria is the Freising Petruslied (10th century). "Christ is risen" (12th century) and "Now we ask the Holy Spirit" are also attested early on.

The terminology of the term "spiritual song" is largely open. Only the religious topic and the verifiable song performance (as opposed to reading poetry) show up as fixed constituents. But even when performing the song, a distinction must be made between solo, congregational and choral songs, and between singing and polyphonic singing. As a rule, the term is also used to distinguish vernacular from Latin liturgical and extra-liturgical spiritual chant. In addition, the sacred song encompasses a wide range of types, from private piety to liturgy, from the hymns of ecclesiastical and non-ecclesiastical communities to the repertoire of parishes.

For the Middle Ages, the term "Spiritual Song" is mainly used for the vernacular unanimous song that was sung by the congregation or a choir during the Mass liturgy, at church celebrations (such as during Easter vigilance) or at devotions (such as pilgrimages). These sacred songs had no liturgical function within the basically Latin liturgy in the strict sense. However, they formed a tradition that after the Reformation - with the exception of the Catholic Church - culminated in the liturgical constitutive hymn. A large number of sacred songs from church communities (orders) and non-church communities (court societies, civic educated classes, Meistersinger societies) are grouped around this core, all of which served to cultivate private (but partly publicly staged) piety. In accordance with this finding, the following overview focuses on the unanimous vernacular parish and choir songs of the Middle Ages from the context of the liturgy, church celebrations and devotions.

Baiern (which also included the Archbishopric of Salzburg at the time) made a not insignificant contribution to the establishment and development of this tradition. This can be seen in the high number of first documents for the medieval sacred song, on which the following overview focuses. Franconia and Swabia, on the other hand, are more receptive in this area. It is difficult to assess whether this fact can only be traced back to the coincidences of tradition. At least different pastoral ambitions of individual orders and the dioceses were behind this striking finding.

The earliest records of tradition indicate that the believers answered the song performance of a cantor with a shout (acclamation). This singing practice is fully developed for the first time in the "Petruslied", which was recorded as an addendum in the first third of the 10th century on the last page of a Freising manuscript (BSB clm 6260) and which perhaps dates back to the 9th century. There is no convincing justification for the fact that the song was made in Regensburg in the meantime. In terms of content, the three-verse song, which is consistently under medieval musical notation (neumes), emphasizes the prince of the apostles as the mediator of salvation for the people in the tradition of the Latin Petrus hymn. Formally it seems to be a processional song in which the faithful responded to each stanza sung with a sung "Kyrie eleyson, Christe eleyson" ("Lord, have mercy, Christ, have mercy"). This acclamation is likely to be borrowed from the (All Saints') litany. With varied texts, the form of the acclamatory call can be found later and up to modern times in the pilgrimage songs.

Since the "Eleyson" acclamation often recurs as the end of the verse in the later (initially single-verse) church songs, this characteristic may have led to their medieval designation as' Leisen '(singular: the' Leis, the 'Leise'). The most famous example of this that has been sung interdenominally to this day is "Christ has risen". Its neumed beginning can already be found around 1180/90 in an ordinarium of the Salzburg Cathedral (Salzburg, UB, cod. II. 6) in connection with the visit to the symbolic grave of Jesus on Easter Vigil (Visitatio sepulchri) as the final chant of the community. From here this song was widely used in sermons, on pilgrimages and as the final chant of the believers in German-language Passion and Easter plays.

The song "Now we ask the holy spirit" is one of the quiet people known to this day, which is related to the Latin Pentecost sequence "Veni sancte spiritus". The famous Franciscan preacher Berthold von Regensburg (died 1272) quotes it in full for the first time in his sermons.

Songs for the sermon

Since the sermon was not subject to any liturgical regulation, it was open to calls and songs (but also to prayers) from the congregation. The usual places for this are the end of the sermon and, above all, the break between the announcement of the sermon topic (Exordium) and the subsequent sermon text. As early as the 12th century, in a Benediktbeurer manuscript (BSB cgm 39) at the end of an All Saints sermon, "Help

The oldest transmission (middle of the 15th century) of the "Media vita" comes from the Archdiocese of Salzburg (St. Peter, Stiftsbibliothek, ms. B. IX 28 [10]). Already around 1480 a two-part version of the later popular song (Leise) is documented from Ebersberg (BSB clm 6034). A Wessobrunn manuscript (BSB cgm 444) around 1425 is the oldest evidence for the song "The day that is so joyful". In an Amberg manuscript (BSB clm 2992) the German-Latin mixed song "Ein Kindelein so löbelich / est natus hodie" can be found as an addendum from the 16th century, which became the second stanza of "The day that is so joyful". Following the sermon, the congregation also seems to have sung songs about the Ten Commandments (Decalo songs); one of these songs, "Süßer Vater, Herr Gott" was recorded in a Middle Bavarian manuscript (BSB clm 6034) from the second half of the 15th century. Psalm songs before and after the sermon, however, are a novelty of the Reformation.

Songs in the context of the liturgy

The mass as the central liturgical celebration of the faithful, to which only Latin was allowed as the church language in the Middle Ages, shows particularly clearly the difficulties in establishing vernacular sacred songs within the liturgy. There is not a single spiritual song in the vernacular for Baiern that was sung by the congregation during mass. The situation is different with celebrations of worship as site-specific extensions of the normatively regulated liturgy. Here, especially in the Bavarian-speaking area, there is a wide variety of evidence for religious parish and choral songs. But even here there are clear differences: the numerous transmissions of the liturgical hymns and sequences, particularly numerous in Bavarian manuscripts, found their way into church hymns and choirs only in exceptional cases. Rather, it was inspired by the cantio, which, as a Latin stanza song, is itself an embellishing extension of the liturgy.

Folk-language sacred songs can be found in the course of the church year, especially at religious celebrations of the Christmas and Easter festivities. A special highlight at Christmas is the child's cradle, in which, following the canonical evening prayer (Compline), the baby Jesus is lulled to sleep by Mary and Joseph in a scenic representation. The starting point for this is the cantio "Resonet in laudibus", which, together with the refrain-like "Magnum nomen domini Emmanuel", was sung primarily for Compline. Its melody and individual stanzas form the basis for the "Joseph, dear neve mein" (today's form: "Joseph, dear Joseph mein") as the main song for the child's cradle. The popular song, also used in Christmas games, is among others. in two manuscripts - one from Tegernsee (BSB cgm 715) in the middle of the 15th century - with songs by the monk of Salzburg, an anonymous at the court of Salzburg Archbishop Pilgrim II of Puchheim (r. 1365-1396). Hence it is repeatedly, but wrongly, regarded as its creation. For the "Magnum nomen domini Emanuel", a Wessobrunn manuscript (BSB cgm 444) from 1425 also includes the song "Da Gabriel the angel clear" with the well-known stanza "Sausa Minne, / Gottes Minne, / now silent and calm" to appease the " crying child ". From the repertoire of German-language Christmas carols, the "The day that is so joyful" already mentioned in the section "Songs for Sermon" deserves to be highlighted.

At the Easter Festival too, church celebrations were the starting point for German sacred songs on several occasions. These include dark or pumper metten (Matutinae tenebrarum) on the last three days of Holy Week with the passion hymn "Rex Christe factor omnium", which was expanded in the 14th century to include the refrain "Laus tibi Christi". The German version includes the stanza "Oh you poor Judas, what have you done", which was also attested for Bavaria (BSB cgm 715), which was used in the practice of driving out Judas, but also to political counterfactures (existing melody underlaid with new text) - especially in the Reformation - served. In many cases, at the end of the visit to the grave (Visitatio sepulchri) at the end of the Easter matute, the community said "Christ has risen".

As with the processions, there are also acclamations on the pilgrimages (see the section "Beginnings"), but these were apparently soon supplemented with sacred songs. Already from the beginning of the 13th century the song "In the name of God we drive" is documented, which in the further course - later expanded to include the one-strophic pilgrimage song "Help us the holy grave" - ​​also attested since the 13th century - as a journey -, battle, pilgrimage and procession song served. Its oldest record is in a Wessobrunn manuscript (BSB cgm 444) from around 1425. We know the Jacob song from two Tegernsee manuscripts (BSB cgm 809 and cgm 817) from the beginning of the 16th century, which was probably intended for a pilgrimage to Santiago di Compostela.

Religious songs of the most varied forms were an integral part of court societies (minstrels, song poets), urban educated classes and the Meistersinger societies. As a rule, her songs were limited to this group of recipients. For medieval Bavaria, however, two important exceptions can be named: For the transmissions of Latin hymns and sequences by the monk of Salzburg, which focus on the Passion, Easter, Corpus Christi and Mary, an ornamental function at church services at the Salzburg bishopric cannot be fully implemented exclude. And the melody of the Marian song "Maria zart", which has been passed down extraordinarily widely in single-sheet prints since 1500, is likely to have come from a member of the Augsburg educated class.