Why are union workers underpaid

The majority of employees at the Amazon Bessemer logistics center in Alabama voted against union representation in the company. The result is disappointing, but it does not come as a surprise because Amazon put the employees under massive pressure. Nevertheless, the conflict had a signal effect for the trade union movement in the USA and could pave the way for a reform of labor law. 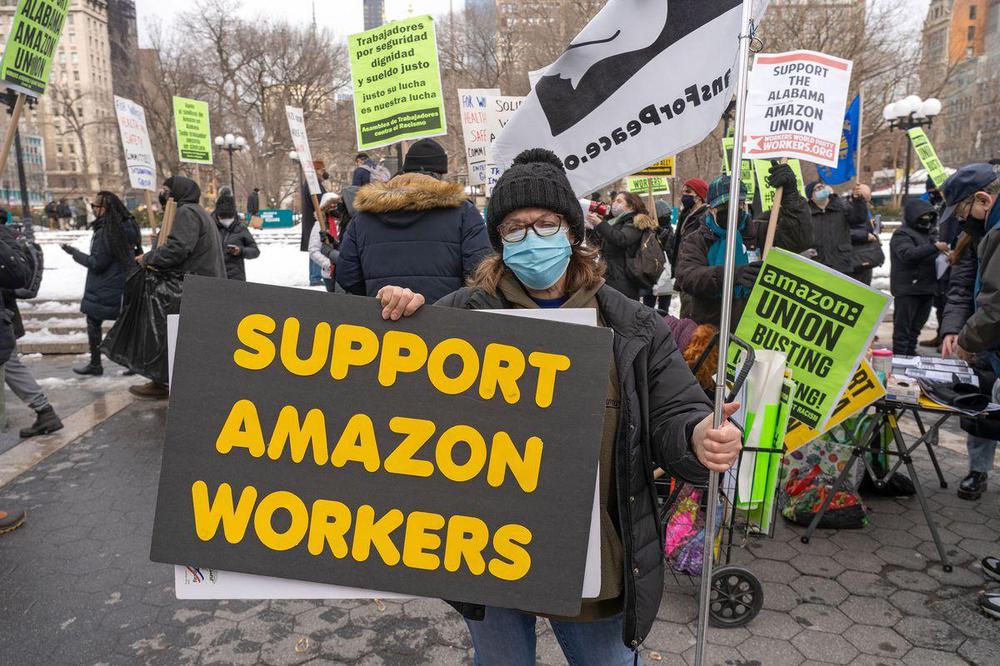 The protests for the establishment of a trade union advocacy group at Amazon received national attention and are likely to have lasting effects. DGB / Archive

The small town of Bessemer in Alabama has been one of more than 100 Amazon fulfillment centers in the United States since March 2020. When planning the center, Amazon had promised 1,500 new jobs in the small town. That had not only caused anticipation among local political representatives of the poor community. The settlement was not in vain for Bessemer and the Jefferson County region. To recruit the service provider, there were tax gifts of more than 40 million dollars over ten years and three million were invested in the infrastructure. Amazon's start was promising. The company hired far more employees than promised. Thanks to the changed consumer behavior in the corona pandemic, Amazon benefited massively. Today almost 5,800 people work in Bessemer. More than eight out of ten employees are African-Americans.

In the first six months of the Covid-19 pandemic, 20,000 Amazon employees were infected

But with Amazon's settlement there weren't all winners. The employees were often left behind. Since Amazon not only kept its distribution centers running through the pandemic, but also expanded and was also negligent in terms of occupational safety, almost 20,000 Amazon employees in the USA were infected with Covid-19 in the first six months of the pandemic alone. In addition, there were the inhumane working conditions that existed at mail-order companies before the pandemic. Jennifer Bates, trainer at Amazon in Bessemer, said at a Senate hearing in March 2021: "The work itself is grueling too. (...) My working day feels like 9 hours of intensive training every day. And they follow our every move - If the computer does not scan, this time is counted as absent from work. I learned from the start that I can be disciplined or even fired if I work too slowly or deviate too much time from the task. "

In addition, there are insufficient breaks and the burden of climbing stairs in the four-story building for hours. What weighs most heavily for many employees, however, is that they feel disrespectful and do not feel valued in their work. As Jennifer Bates put it, "Amazon goes into poor communities and claims they want to help economic growth. (...) That should mean paying its employees a living wage and benefits ... and making sure that employees are under safe conditions and working in healthy conditions. Because we are not robots that only live to work. […] We, the workers, deserve to be treated with dignity and respect. "

The feeling of being treated like a machine controlled by algorithms aroused the desire for union interest representation among some of the Amazon employees. So far, however, none of the Amazon fulfillment centers in the US are unionized. Why is it so difficult for the unions to organize the big technology-driven companies? 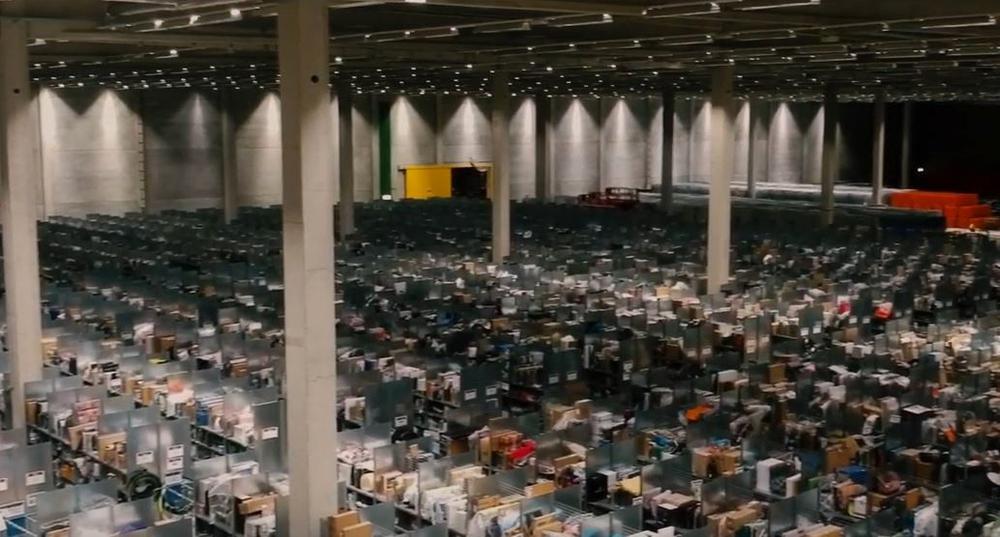 Amazon's logistics centers are all huge, whether in Germany or in places like Bessemer in the USA. Employees have to be in good shape to be able to do their job on normal days. DGB / Archive

On the one hand, this is due to the weak US labor law. US unions have to organize each company individually. That makes union campaigns difficult in large companies with many locations like Amazon. There is also another hurdle: since a decision by the US National Labor Relations Board (NLRB) in 2019, employers have the right to prohibit union representatives who are not employees of the company from entering their premises. This also applies to areas of the site that are open to the public. Unions often go to employees' homes as a result, but this was not possible during the pandemic. Many of the organizational meetings took place in a motel and restaurant near the Amazon site.

There are other structural reasons for the weakness of the unions vis-à-vis companies. Today the southern United States is almost union-free: only eight percent of the workforce in Alabama are union members. The state is among those with right-to-work legislation. This law weakens the trade unions by making union membership free in organized companies. Workers enjoy the benefits of the union-negotiated agreements but do not have to pay any contributions. This drains the unions' resources and reduces their ability to organize companies. In addition, an entire industry of consulting firms that specialize in keeping companies union-free has grown in the US over the past 30 years. Amazon also hires professional anti-union advisers, so-called Union Buster.

Workers in Bessemer who wanted to organize themselves turned to the retail and wholesale trade union RWDSU - a rather small but progressive union. The RWDSU then started an organization campaign and by December 2020 had received more than 2,000 signed letters of intent from employees to want the union to represent them. The national labor authority then allowed an official union election.

Supporters of the union hoped for a nationwide signal for the rights of workers regardless of the outcome of the election. Specifically, the employees called for, among other things, increased job security and better working conditions, a reintroduction of the two-dollar pandemic allowance for hourly wages and a containment of aggressive time recording practices. The organization campaign made headlines across the country because of its possible signaling effect and received prominent support. President Joe Biden published a short video in February in which he did not name Amazon, but made it clear that workers must be able to choose whether to be represented by a union, free from employer pressure. 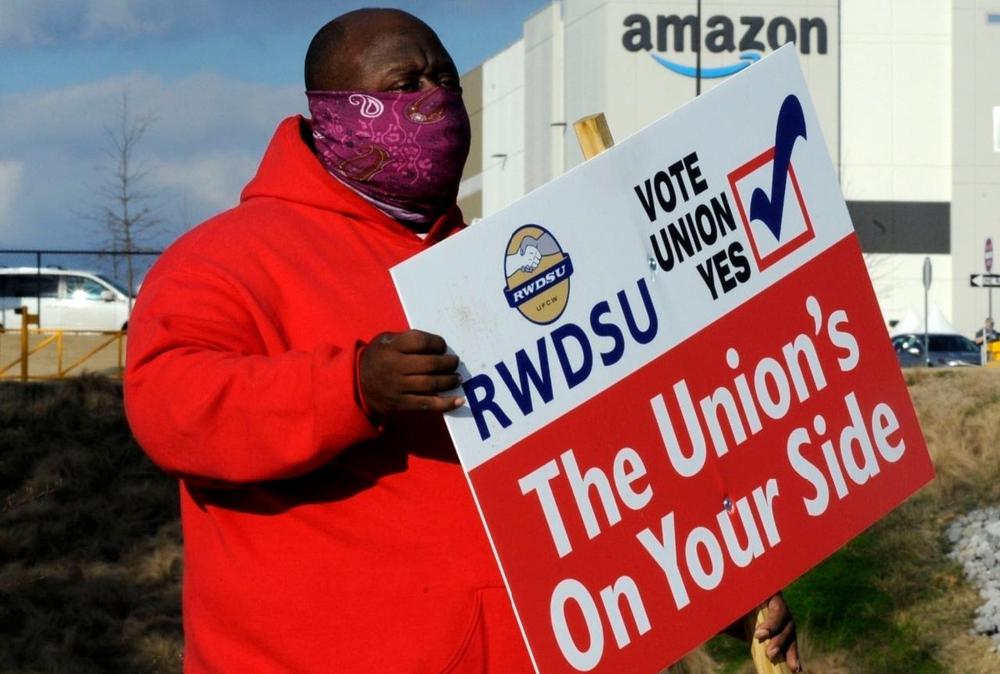 Amazon consistently exploited the weak US labor law and put the employees in Bessemer under pressure - especially those who advocated representation by the RWDSU. Protests on the premises are prohibited by law, which is why trade unionists could only advertise the matter outside. DGB / Knut Panknin

Amazon consistently exploits the weak US labor law and puts the employees in Bessemer under pressure - especially those who advocate representation by the RWDSU. Amazon even set up a website against the union election. "We were forced into what is known as 'union training'," said Jennifer Bates. "They lasted up to an hour and we sometimes had to go several times a week. The company bombarded us with reasons why the union was bad. (...) Much of what was said in these meetings was untrue, such as for example that people would lose their benefits if they joined the union. (...) Amazon had posted anti-union signs and messages all over the company ... even in the toilets. "

The heroic Amazon workers in Bessemer have made history

The election took place as a postal vote due to the corona. A total of 3,215 ballot papers were received between February and the end of March. This means that more than half of the employees took part in the vote. On April 9, it was clear that Amazon had won this round. After the votes were counted, only 738 of the workers had spoken out in favor of the union, but 1798 against it. The result is disappointing, but not surprising given the uneven playing field in the US. Richard Trumka, President of the AFL-CIO, said: "The heroic Amazon workers in Bessemer have made history and helped pave the way for justice in the workplace for everyone. (...) They spoke up and made the reality of their lives that too many working people know about - the brutality of being underpaid, overworked and constantly afraid of what lies ahead. That's why more than three-quarters of Americans supported this organizing campaign (...) The workers who have sought membership in the RWDSU are at the forefront of an emerging movement for democracy in the workplace. Americans want to unionize, and it should never be so difficult to do. (...) This is the struggle of our time and it begins with the passage of the PRO Act. "

Trumka combined his sharp criticism with the request to Congress that the Protecting the Right to Organize Act (PRO Act). This would annul right-to-work laws nationwide and introduce urgently needed reforms of US labor laws, which would make it easier for unions to organize. The law has already been passed by the House of Representatives, but the chances of a Senate majority are rather slim.

The RWDSU union announced that it would challenge the election result at the NLRB. While it is still unclear whether the election will be declared invalid, it is certain that the defeat in Bessemer will not mark the end, but rather the starting signal for increased efforts to promote unionization in the USA. RWDSU President Stuart Appelbaum believes the vote demonstrated "the power that employer intimidation and interference can have, as well as Amazon's ability to scare people into voting for the union." Regarding the future, Appelbaum was optimistic: "The union will not go away. [...] This campaign is far from over. The campaign is also the best argument why we need labor law reform in the United States."