Which scientific discovery is the most interesting

To the print version | german version

Great researchers from the fjord: 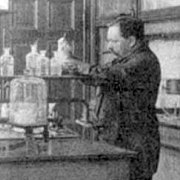 Theodor Curtius (1857-1928)
Theodor Curtius was born in Duisburg in 1857. He first studied music and natural sciences in Leipzig and Heidelberg. Later, under the influence of his teachers Robert Wilhelm Bunsen in Heidelberg and Hermann Kolbe in Leipzig, he turned more and more to chemistry. After completing his doctorate in Leipzig, he went to Adolf von Baeyer's laboratory at the University of Munich. There he succeeded in discovering the diazoacetic ester, the first representative of a new class of organic nitrogen compounds, the diazo fatty acids. “This interesting observation was of momentous importance for science and pointed the way for the young researcher throughout his life,” writes Carl Duisberg on the occasion of the Theodor Curtius commemoration of the Heidelberg Chemical Society in May 1930. “There are probably very few scientists the field of chemistry, of which, like Curtius, one can say that all of her work emerged in a systematic, logical development from her first work, ”summarizes Duisberg (1861–1935), the former head of the Bayer paint factories in Leverkusen.

Curtius completed his habilitation in 1886 at the University of Erlangen with a thesis on diazo fatty acids. Shortly afterwards (1887/1888) he drew attention to himself with another discovery: the formation of hydrazine from diazoacetic ester, for which he applied for a patent in Germany and the USA. "It was precisely this discovery, which made the name Curtius widely known, that was the main impetus for his appointment to Kiel, where, after such achievements, great hopes were placed on the 32-year-old researcher," reports Otto Diels in his article on the story chemistry in Kiel. On December 23, 1889 Curtius was appointed full professor of chemistry and director of the Institute of Chemistry in Kiel. In the following year he continued his successful series with the formation of hydrazoic acid from hydrazine.

The new acid was a substance with very special properties. "Its composition, its character comparable to that of hydrochloric acid and its unprecedented explosiveness were properties enough to secure the interest of the entire scientific world for it and its discoverer," says Diels. This discovery also found practical application in explosives technology: During the First World War, the lead salt of hydrazoic acid was introduced as an initial detonator. During his time in Kiel the publication of the degradation pathway of carboxylic acid azides named after him - the so-called Curtius rearrangement - also fell.

In 1897 Curtius left Kiel University after rejecting a call to Würzburg in 1892 and one to Tübingen in 1895 to succeed the well-known chemist August Kekulé at the University of Bonn. As early as April of the next year he accepted a call to Heidelberg. There he worked for 28 years as director of the chemical institute. At the end of the winter semester 1925/26 he resigned from teaching and leading the institute. But he was only able to enjoy his retirement for a short time. Curtius died on February 8, 1928 in Heidelberg.

With so much scientific success, the honors were not lacking: in 1895 he was appointed Prussian Privy Councilor, and when he was appointed to the chair in Heidelberg, he received the title and rank of Privy Councilor, 2nd class in Baden. The University of Erlangen, from which his first great discoveries began, awarded him the honorary doctorate of medicine in 1908, and the Technical University in Karlsruhe appointed him Dr. Ing. E. h. The bachelor Curtius was not a scholar who only knew his science. Duisberg writes: “He was always the same, cheerful, sensitive and warm-hearted comrade who was not completely absorbed in his professional interests, but remained an enthusiastic admirer of art and a warm friend of beautiful nature throughout his life. He was a skilled piano player and good composer, an excellent singer with a melodious baritone voice, who appeared in concerts several times in his younger years (...) His predilection for alpine sports, his enthusiasm for the beautiful mountains (...) are well known. «

Curtius and the mountains

Theodor Curtius was an avid mountaineer at a young age, but had to quit the sport in 1892 due to a serious illness. During his time in Munich he got to know the mountain guide Christian Klucker, with whom he went on many mountain tours, including first ascents. He mostly visited the Swiss mountains to relax during the holidays. He was particularly taken with the mountains of the Upper Engadine. With his brother Friedrich, he had the Forno hut built on the Forno glacier in 1891 as a base for the reconnaissance of the then little-known Bergell Alps. He later bought a small property in Sils-Maria in the Engadin, where he regularly spent his autumn holidays. In 1894 Curtius founded the Kiel section of the Alpine Club, of which he was chairman until the end of 1896.