What is time or time to define

What is time Where is she from and where is she going? Or as Einstein asked: 'What does time do when it goes by?'

The attempt at a definition: time is the infinite continuous course (flow of time) of existence and events, which takes place in an apparently irreversible sequence from the past through the present into the future.

Time is subject to an attempt to make it quantifiable through various measurements: the order of events, the duration of events, or the intervals between them. Together with the three spatial dimensions, time is often referred to as the fourth dimension.

The term “arrow of time” means the fact that there is a clear and directed connection between the past and the future. C.F. von Weizsäcker summarized it in the succinct saying: "The past is factual, the future is possible."
And the physicist Albert Einstein (1879 to 1955) asked, years after the publication of his "Theory of Relativity", the fascinating question: "What does time do when it passes?" to the great mathematician Kurt Gödel (1906 to 1978).
The physicist John A. Wheeler (1911 to 2008) characterized time with a graffiti saying: “Time is nature's way of preventing everything from happening at the same time.” (Original: “Time is nature's way to keep everything from happening all at once. ")

The present is quasi a point on the timeline and, like all points in mathematics, has no expansion. Humans (and probably all living beings) only ever experience time as the present (in the “here and now”, so to speak).

The fact that time flows is not an experience, but a subsequent abstraction. Sometimes time is also thought of as a kind of container that allows it to flow.

As a subjective experience, time (unlike the measured time) runs at different speeds for different living beings (also for those of the same species / genus).


The shortest period of importance in modern physics is the Planck time, named after the physicist Max Planck (approx−43& nbsp; s); one of the longest intervals is the “Galactic Year”: the duration of one orbit of our solar system around the center of the Milky Way (approx. 225 million years).

Two opposing viewpoints on the "essence of time" are discussed among prominent philosophers.

One view is that time is part of the fundamental Structure of the universe is - an event-independent dimension in which events occur one after the other. Isaac Newton was behind this theory, so it is sometimes referred to as Newtonian time (also called absolute time (and space)). Here time is thought of as an “empty” container in which events can (or may not) be placed; But time remains a container that exists regardless of whether something happens in it.

The opposite view is that time is part of a fundamental intellectual structure is (along with space and numbers) that people use to order or compare events. This second view is in the tradition of Gottfried Leibniz and Immanuel Kant, and says that time is neither an event nor a thing and therefore cannot be measured itself, and that time travel is impossible.

According to Kant, time is not a concept derived from experience but (just as with space), an a priori idea / concept "Time is a necessary idea on which all views are based." [Critique of pure reason, of transcendental aesthetics]. This means that neither time nor space can be “recognized” by humans - they are a prerequisite for any knowledge.

In physics, time is clear operational defined as "what a clock shows". Time (symbol: t) is one of the seven fundamental physical quantities (in addition to mass, temperature, current, etc.) and is used to define derived quantities: speed as meters / second.

Currently the international SI unit, the second (s), defined by as a multiple of the transition frequency of cesium atoms.

Until the reinterpretation by Albert Einstein, it was assumed that the time is the same everywhere in the universe and that all observers measure the same time interval for every event.


In the “special theory of relativity” Einstein postulated the constancy and finiteness of the speed of light (c) for all observers (and thus the necessity of the ether is unnecessary). He showed that this postulate, along with a reasonable definition for the simultaneity of two events, requires that distances appear compressed and time intervals lengthened.

It then turns out to be a convenient mathematical formulation in Minkowski space-time, a structure that combines the three dimensions of space with a single dimension of time. In this formalism, distances in space can be measured by the duration that the light needs for this distance (hence: light year).

Two events in Minkowski spacetime are separated by an invariant interval. Different observers can calculate different distances or different time intervals between two events, but the invariant interval between the events is independent of the observer (and its speed).

The term, sometimes too sense of time called, is not yet sharply defined and describes the subjective experience of time, especially the experience of simultaneity.

Experiencing and measuring time have different philosophical, biological, physiological and physical aspects. The subjectively experienced presence E.g. in physiology it covers a period of 2-3 seconds, while in physics the present is understood as a sharp boundary between past and future.


According to neuropsychological investigations, this period of 2-3 seconds should be quantified in about 50-100 parts, thus each interval of about 30 msec. include.
For example, noises up to 0.03 seconds short can still be differentiated according to their sequence and resolved over time as a sequence.

Also whether the time itself is "felt", analogous to a sensation or whether the "sense of time" is not rather an "evaluation", is the subject of research.

The methods of temporal measurement or chronometry can be divided into two categories: the calendar, a tool for organizing time intervals, and the clock, a physical instrument that measures periods of time depending on a reference (oscillating system).

The time is the indication of a point in time (17:30:33), usually expressed in hours, minutes and seconds;

It is determined depending on the location (time zone; previously true or mean local time). The day is divided into 24 hours, the hour into 60 minutes and the minute into 60 seconds.

The German language is teeming with words that refer directly to time. Here is a small selection.

Time - in the beginning 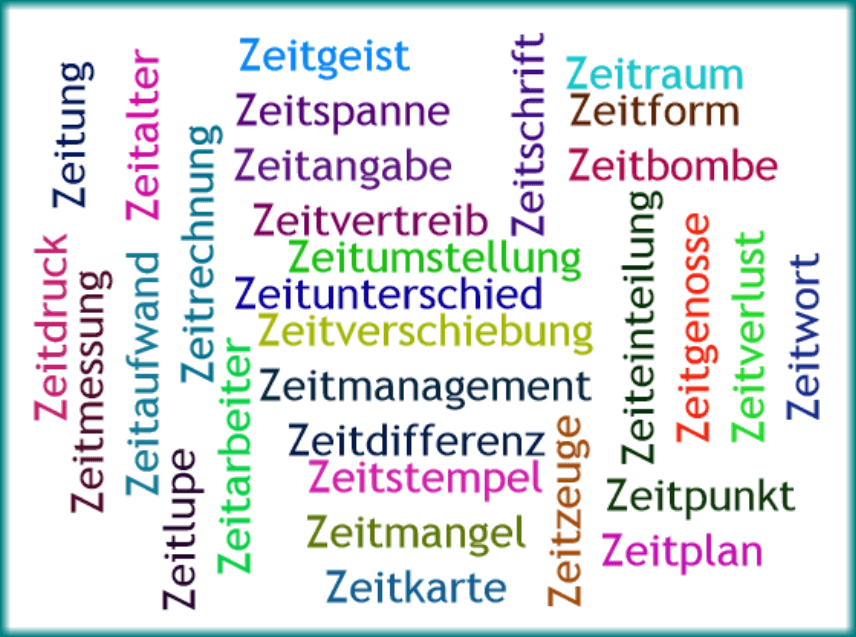 currently, early, at times, at the same time, ahead of time, in time, in the meantime, at all times, at that time,
at times, anytime, in good time, timely, short-term, prematurely, currently

Between time; move with the times; over time; from time to time; since time immemorial; the signs of the times; kill the time;
to take time; it's about time; in my days; recently; lose no time; time is running out