Which Japanese food would you recommend

Rice as a staple food

Around the 5th century BC Around BC, the cultivation of rice in wet fields began in Japan. As a result, a society emerged that had its foundations in agriculture and in which rice became the most important crop and staple food.
For people in East and Southeast Asia, rice is the main ingredient of a real meal, while the side dishes only play a subordinate role. The typical Japanese meal is no exception. Rice is boiled or steamed and moves from the pot directly into the waiting rice bowls without any additional spices or ingredients. Side dishes like fish and vegetables are flavored with a variety of ingredients, but their role is primarily to whet the appetite for rice.
In Japanese, “to eat a meal” means “go-han o taberu”; Literally translated, this actually means “to eat rice.” The words “go-han” (rice) and “shokuji” (meal) have the same meaning and can be freely interchanged.
In the past, poor people and those whose fields were higher up and not so fertile had little access to rice. So they mixed their rice with barley or other grains. At festivals and special occasions, however, they too found a way to eat rice and mochi rice cakes without having to mix these dishes with “lesser” grains.
Mochi are made by pounding sticky rice with a wooden pestle in a mortar. The Japanese used to believe - just like the people of Southeast Asia - that the spirits of the rice plants reside in the grains. Therefore, sacred rice, which was made into mochi, was a special dish for high festivals. Even today, on New Year's Day, the most important festival of the year, the family eats mochi rice cakes in a “zoni” soup, which is accompanied by seafood and vegetables.
Sake is made from rice and this rice wine also takes pride of place at festivals. Japanese festivals are always an opportunity to eat rice and mochi, as well as to drink sake - in other words, to enjoy an abundance of foods and drinks made from the rice plant.
It can therefore be said that traditional Japanese cuisine is designed to bring out the best in rice and sake. 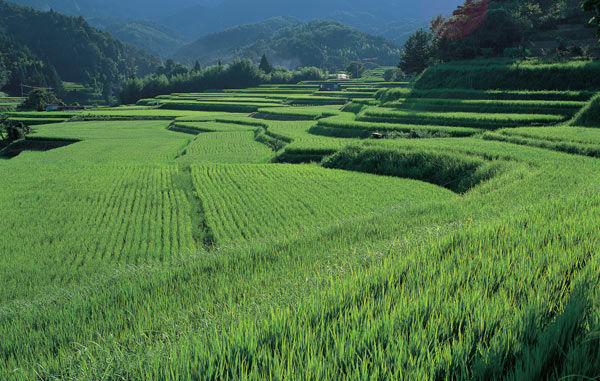 Picture: Terraces with summer rice fields. The green rice plants bend in the wind. In autumn they will shine golden, and their heavy ears then wait for the harvest. Image taken from Ogi, Otsu City, Shiga Prefecture. (Photo: Mitsuhiko Imamori)

In the history of Japanese cuisine, however, one cannot ignore the many centuries in which it was forbidden to eat the meat of four-legged animals. The first law prohibiting the consumption of meat was passed in 675, around a hundred years after Buddhism arrived in Japan.
In the 7th and 8th centuries, when he ascended the throne, every emperor renewed an imperial edict prohibiting the consumption of meat. The basis for this was the Buddhist teaching that the killing of animals is wrong. The fact that these edicts were regularly renewed suggests that some subjects found it difficult to stop eating meat. But around the 10th century there was practically no one in Japan who still ate meat.
In China and the Korean Peninsula, Buddhist monks were forbidden to eat meat or fish, but in Japan even ordinary people did not eat meat. On the one hand, this is due to Buddhism, but on the other hand, the local Shinto religion also saw the eating of animal meat as unclean.
However, this ban only included mammalian meat, not fish and other seafood. While whales are mammals, people thought they were huge fish and so there was no ban on catching and eating them. Wild birds were also eaten. Because chickens and roosters were believed to be messengers of the Shinto deities, their meat and eggs were not consumed until the 15th century.
The Ainu on Hokkaido in northern Japan covered a large part of their food needs with meat from wild birds and animals; deer and bears in particular were an important part of their cuisine. And in the far south, in the kingdom of Ryukyu on the islands of Okinawa, different laws applied; there was no ban on eating meat. People kept pigs, goats and other animals and ate their meat. In the mountainous regions of the main islands of Japan, people lived on fish they caught in the mountain rivers. They also hunted mammals to get their skins and make medicinal products. The meat of the hunted animals was then eaten. Others who were sick or who wanted to strengthen their bodies practiced "kusuri-gui" (eating game meat for medicinal purposes). Even so, animals were not kept as food suppliers, and meat consumption in Japan was remarkably low for many centuries.
Like their neighbors in China and Korea, the Japanese did not drink milk from pets, and dairy production began much later. It is therefore not surprising that the preparation of fish and other seafood has become an extremely fine art in Japan.

Western and Chinese chefs perfect their skills and skillfully use their tools of the trade to create a taste that is distinctly different from that of the natural ingredients. In traditional Japanese cuisine, on the other hand, the goal is to keep the “human” part to a minimum and to offer dishes with a taste that comes as close as possible to the natural state.
The cuisine of Japan traditionally emphasizes the original taste of the ingredients and does not try to hide the real taste with human ingredients. The ideal of Japanese culinary art is therefore not to overdo it. The ultimate “understated” Japanese dish is “sashimi”. The fresh fish is served raw and cut into thin slices; these are then dipped in a mixture of soy sauce and wasabi. This is the best way to enjoy the taste of the fish, and for the Japanese, sashimi is the pinnacle of culinary experience in their country's kitchen.
For foods to come as close to their natural taste as possible, they have to be fresh. That is why in Japan they check the freshness of the ingredients very carefully before assessing the skills of the chef. Culinary enthusiasts in Japan love seasonal ingredients - because tasting the season allows you to enjoy the taste of freshness to the fullest. This is exactly what is at the core of traditional Japanese cuisine. 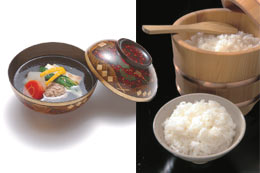 Picture: Above left: New Year is the time to celebrate, and the soup called “zoni” is a must. The ingredients and spices differ depending on the region, but “mochi” (rice cake) are a must. Above right: Freshly cooked rice tastes simply delicious. (Photos: Toshihiko Kono)

Evolution in the kitchen

When Western influence found its way into Japan with the Meiji Restoration from 1868, the average Japanese was rather thin. To the government and the leading circles of society it seemed necessary for the construction of a modern industrial nation larger and stronger grown people who could serve as workers and soldiers. For this reason, the consumption of meat and dairy products was encouraged.
However, with the exception of “sukiyaki” and a few other dishes, Japanese cuisine did not offer any instructions on how to cook meat. Therefore, the chefs stuck to recipes from abroad. The Western cuisine initially served as a great model. At that time, Japan was striving for rapid modernization and the West was seen as a model in many areas. It was not until the middle of the 20th century that meat recipes were introduced from China and Korea, although rice is also a staple food there and is eaten with chopsticks.
Meat was a new ingredient in Japan that required new recipes from abroad. With increasing popularity, the meat recipes then took on more and more a typically Japanese character. The spices have been modified to make the meat taste better with rice, and the ingredients have been cut smaller for more convenient eating with chopsticks. The Japanese love the taste of soy sauce more than anything, and they thought Worcester sauce was a kind of western soy sauce; so they started using this sauce for their Japanese-style western dishes.
Today the dishes cooked at home in Japan have so many foreign influences that some are already calling them cosmopolitan, even if it is more of a new type of Japanese cuisine. People in Japan are said to be very adept at taking in things from abroad and adapting them to their own tastes. Of course, this also applies to the kitchen.
The consumption of rice in Japan has been falling steadily since the 1960s. Today it is around half of what it was 40 years ago. This is actually not surprising, as rice is increasingly taking a back seat to side dishes. In the past, people ate a lot of rice at home, a side dish, a soup (mostly miso) and pickled vegetables. Several side dishes were only served at festivals and special occasions. Today you eat three to four side dishes with every dinner. So it's only natural that rice should no longer be the undisputed star at the dining table.
Economic growth has made it possible for the people of Japan to enjoy as many dishes with an ordinary meal as their ancestors could only enjoy on special festivals. Today every meal is a culinary festival, but without the ancient gods being present.

This article was written by Prof. h.c. Naomichi Ishige, National Museum of Ethnology, in collaboration with Aoyagi Restaurant. It has been translated into German for news from Japan. (c) Nipponia