I look forward to your feedback, suggestions and personal contact.

I am also happy to answer your questions.

On this page I would like to put together answers to the most common questions about font acquisition. (Page under construction)

How do you motivate children to improve their handwriting?

Children who can only write legibly with the greatest effort suffer most from this handicap themselves. Therefore, rule number 1 applies: Show understanding for the problem - for example, even with a page of the magazine that is noticeably carelessly written. In times of stress and time constraints, the affected children lose their handwriting coordination. They make an effort when they have enough time. With comments like: "You didn't have much time!" or "You just wanted to finish there!" the child feels understood.

Rule number 2: Take away the fear of the deficit. Affected children often believe that something is wrong with them. You have to explain to them that everything may not have gone optimally when they bought their font and that they can change and control their font - even now. And that even if there was a motor problem, they can only correct their handwriting with proper training. For this training you have to show them effective starting points and encourage them to take their first steps again and again.

Which font is most beneficial?

Doesn't it matter what script you learn?

My perspective on the font is determined by the font training and it can never be about conveying a certain font in its pure form. My focus is on the spelling of the individual letters - primarily the lower case letters, because they determine the font. Which letterforms always cause problems and which don't? 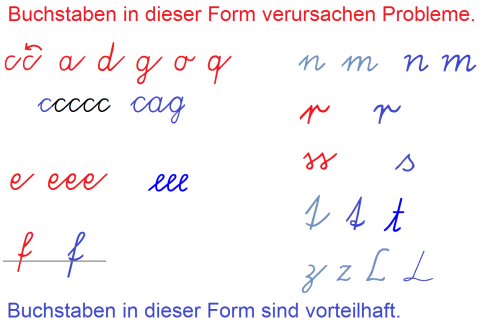 Explanation for this figure:

Which pens should the children write with?

Children usually learn to write with a pencil. For good reason: a pen shouldn't "run" too easily on paper. The rubbing of a soft pencil on rough paper offers the necessary resistance to be able to keep the lines “on track”. All ballpoint pens (ballpoint pens, rollerball pens) roll too easily for beginners to write. Experienced writers can only feel the "slipping" effect when writing on smooth, glossy paper; Inexperienced writers slip imperceptibly even on normal paper. Your typeface is significantly worse when you use a rollerball than when you write with a pencil.

Which writing instrument is closest to the pencil? In my experience it is the writing side of the simple ink killers (see picture below left / not the ones with a fineliner tip). They have a firm, pressure-resistant tip, produce an even line width and slight resistance on the paper without "scratching". When it comes to writing training, ink killers prove to be ideal writing implements for many children.

Otherwise, it is advisable to let children consciously try out the writing behavior of different pens, including different fountain pens. By testing, you will find your "favorite pen" with which you have the best writing experience. It is important that children think about it at all and not write with "any tangible writing implement".

How can the pen hold be changed?

In my experience, at the age of fifth graders it is hardly possible to change the pen position, at least not as part of weekly writing training. But also elementary school colleagues report that they repeatedly show how to hold pens correctly, but that the children often fall back into early childhood patterns. It seems that the steering function is set early within the hand.

Noticeable with many pen positions are:

> two to three fingers on the pen

> Touching the pen too deeply, including blocking the view

1. The writing is not drawn out of the finger joints, but by moving the whole hand. Fatigue and cramping are inevitable.

Keeping the thumb joint away from the pen is the only pen grip improvement I can teach some fifth graders, as far as I can.

Particularly problematic for me is the obstruction of view due to many pen positions. The children sit hunched over the paper with their heads crooked. Some complain of neck and back pain. Others will only feel the consequences when permanent damage to their posture has occurred.

Can't it be left to the schools to decide whether they want to introduce cursive writing?

„..Since I'm in the seventh grade and at the age of 14, I know that some prefer print, some prefer cursive. In grammar school it is now the case that everyone has their own script and can decide for themselves which script he / she uses. The fact that everyone now has their own script does not mean that everyone can read everyone else. Even with teachers it is sometimes the case that the whole class cannot read anything at all …… .. If students now only learn print script, then the teachers should also agree to only use this script. "(Letter to the editor in WamS from 02/22/15 from Surrayya Mir, Frankfurt a.M., on "Learning to write or learning to write" by Susanne Gaschke, 02/15/15)

I can only add to this letter to the editor that I myself - out of consideration for the block writers - only write block letters on the blackboard in almost all study groups. A font only works as a communication medium if this medium is mastered by everyone. And that is no longer the case with cursive handwriting because cursive handwriting is no longer adequately taught in many elementary schools. If you want to keep cursive, it must be a binding learning objective for everyone.

Why Do So Many Boys Have Scripture Problems?

My writing evaluations confirm what almost everyone knows from their experience: it is almost only boys who are affected by writing problems (87% of those affected are boys according to my surveys). As far as I know, there are no concrete studies that deal with gender-specific writing motor skills.

I can therefore only note what I observe during writing training and also in art class.

Many boys tend to move more impulsively and work quickly than girls and so run the risk of “overshooting the mark” more quickly. (This creates a fatal effect in the VA, see page "Deficits in the VA".)

Girls tend to be more “careful” and adjusted in everything they do. For the girls, it is also advantageous for the acquisition of writing that round, curved movements and shapes correspond to their aesthetic perception in a special way. Boys often prefer geometric shapes in visual design and font design and have less intuitive access to "meandering movements" than girls. They do not “discover” flowing, uniform contexts of movement as automatically as girls.

Some boys often have too little success in writing and do not develop a positive attitude towards handwriting. But once they have found access, they work just as motivated and successfully on an expressive handwriting as the girls.

Do not “crackle writings” testify to motor deficits?

Not nearly as often as expected! For example, there are boys who come to school on a wave board and have mastered the greatest tricks, but not their handwriting. There are boys who are good at drawing but cannot put letters of the same shape on paper. And then again there are quite a few girls who show coordination problems on the sports field, for example when throwing, jumping or running and who still have perfect handwriting.

If a child shows abnormalities, this does not mean that the motor skills are generally deficient, but first of all that they are undeveloped or underdeveloped in certain areas. And handwriting is such a sub-area. In my experience, a lack of practice, but also incorrect practice and the automation of incorrect directions of movement have a significantly higher proportion of writing deficits than a lack of motor skills.

As an explanation for parents in advance: "Follow-up" means the writing of a letter on a given track. In my experience, tracing can support the acquisition of the letter shape. But it is by no means a sufficient method of writing acquisition.

It is important that the child has "understood" the new movement and can derive it from their movement repertoire. In order to understand a movement, it has to be linked to one's own experience, to what has been seen or experienced. That is why demonstrating, observing and imitating is initially more important than following a given trail. This approach can be supported by visualizing similar movements.

Here is an example s called:

Printed form S.s: Children can imagine a skidding movement on black ice. Only when you can execute this S-movement on a blank sheet (in the air or on the board) quickly and safely that you can reproduce it with your eyes closed will you be able to use this "new" form in a given form Reproduce size.

Handwriting: How can children imagine the difficult “tip” (sloping line upwards, U-turn> s-like curve downwards)? A student's explanation that a skater, for example, could perform this type of movement / U-turn, proves to be helpful, for example, for visualizing the sequence of movements.

The movement must first be understood in principle and practiced freely. Only then can the child practice making the shape even more precisely and in a given size. Tracking can help here. However, if this second step is taken before the first, the child tries in the truest sense "convulsively" to stay on track.