Fake customer reviews: fraud on a grand scale - this is how the million dollar business works

Online reviews are at an all-time high. Every second German Internet user has already shared their experience with a product or service online, according to a current BITKOM study. Various studies show that around 75 percent of consumers consult reviews before making a purchase decision. Customer ratings have thus become a very large factor in purchasing behavior and have a decisive influence on the sale of a product.

They are so powerful that between 20 and 30 percent of all reviews on the internet are manipulated by companies. Companies have long recognized that good reviews are good for business. Even if it sounds extremely dubious, they have long recognized the potential of manipulation and are actively using it. Where manipulation can take place, manipulation takes place. The area is partly highly professionalized and systematically implements the falsification of customer ratings. This is not a niche, but a million dollar business.

The internet has created a great deal of transparency

In the first step, customer ratings are of course welcome and seen as an advantage for the consumer. Thanks to the Internet, there is now an unbelievably high level of transparency - every piece of information can be accessed in seconds from anywhere on earth. Despite all the advantages for the consumer, a large gray area has also developed here. Consumers are deliberately deceived and influenced in their purchase decisions.

Reviews are in the right context and have a trusting effect

Consumers, even if some are already skeptical, attach great importance to customer ratings. You read in the expectation of a trustworthy source, since reviews are located in the right environment, and place great trust in the matter. If companies manipulate at this point, either through positive ratings for their own product or negative ratings for competing products, this is extremely questionable and even legally punishable. In addition, damage to reputation and reputation is very likely if it becomes known.

The risk of getting caught is almost impossible with good execution

As already mentioned, parts of the market are already highly professional. Manipulated evaluations are implemented on a grand scale - technical developments were created to speed up execution and defeat security mechanisms. However, it must also be mentioned that the range of quality and execution can also vary widely. In the market, the execution of self-manipulating employees or interns, via Internet portals for small jobs, secondary jobs for copywriters to manipulation at agency level.

In Germany, manipulated reviews are classified as surreptitious advertising. According to the law, consumers must always be able to see whether a review was made of their own free will or whether it was illegally influenced or manipulated by the company. In practice, however, this proof is extremely difficult and should not be seen as a danger for the executing company.

Partly high professionalization in the market

In most cases, little know-how is sufficient to defeat the portals' recognition mechanisms. Common security precautions are easily circumvented thanks to changing IP addresses, newly created e-mail addresses or sufficient maintenance of the respective accounts. In some cases, evaluations are also created completely automatically by software for creating accounts, setting the evaluation and even creating unique evaluation texts. To do this, text modules from large databases are constantly being recombined. In addition, many reviews are created by professional scribes who take great care in describing and highlighting the positive aspects of a product. Products are simply ordered and returned within the return period in order to bypass additional measures for the evaluation authenticity of the portals, for example on Amazon: “This customer really bought this product”. The execution varies greatly and changes the probability for a normal person to recognize a fake review.

The recognition by the portals almost never works for all versions. Tests have shown that at least 95 percent of all ratings passed through. No matter how wrong or obviously manipulated.

Authentic reviews are the capital of the site

Pure review portals live from credibility. Thus, they are already trying not to publish manipulated reviews in their portals, but the fight is hopeless. Due to the huge amount of reviews and the advanced professionalism, this task cannot be accomplished for companies like Amazon and Co. Manipulated evaluations cannot be prevented. According to its own information, a large German travel review portal already employs more than 30 people to check for truthfulness. Despite the upstream software that filters and detects suspicious features, fake evaluations cannot even be ruled out here.

All companies that have a product to be evaluated are eligible

Nowadays almost everything can be rated on the Internet, for example there are review portals for travel, restaurants, products or doctors. No group can be excluded here without insinuating something to someone. However, the field must also be expanded to include the entire online reputation. You should ask yourself: How do you blog about me? How will I be reported in forums? Like on social media like Twitter and Facebook? Can I influence that as a company? In these areas, too, manipulation takes place, for example through fictitious forum posts.

Higher placement in toplists and the exploitation of the herd instinct

What many fail to consider in classifying fake reviews are two other aspects that are like gold to exporting companies. On the one hand, products with many and good ratings are preferred on many pages, or they slide further up the lists. This higher ranking can have a major impact on sales - for a hotel operator, a higher ranking can quickly amount to several thousand euros per bed per season.

It just has to be clear to you that there are fake reviews, but never all!

In order to recognize fake reviews as a user, there are some tips and aspects that help with identification. In many cases, however, it is almost impossible to find out whether a review has been tampered with or not. What is very important is the mere recognition that some reviews have been tampered with. With this knowledge, the perception and classification, in addition to normal common sense and one's own gut feeling, changes considerably.

With these points, the probability of manipulation increases:

In the article "8 indicators by which you can recognize fake customer reviews" we have taken up these and other tips and explained them in detail. 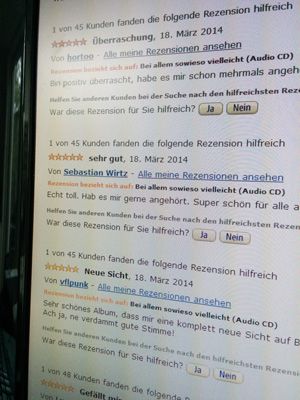 A prominent, current example is the Amazon entry for Reinhold Beckmann's music album "Maybe with everything anyway", which was obviously manipulated.

Here, fake reviews of the album were created in a very clumsy way, which did not go undiscovered for long. There are several factors that speak strongly in favor of manipulated star ratings. The ratings were given in the same period (March 17th and 18th), almost all profiles have synonyms or fantasy names and the reviewers have rated all new accounts and no other products. Only 5 star ratings were given, the texts are pure hymns of praise from superlatives without a detailed description and the ratio of only positive to only negative ratings is very noticeable.

Open your eyes, refer to as many reviews as possible - positive and negative. Don't be limited to one thing.

How important are your product reviews? Have you already found obviously manipulated reviews? Do you write positive reviews yourself for money?