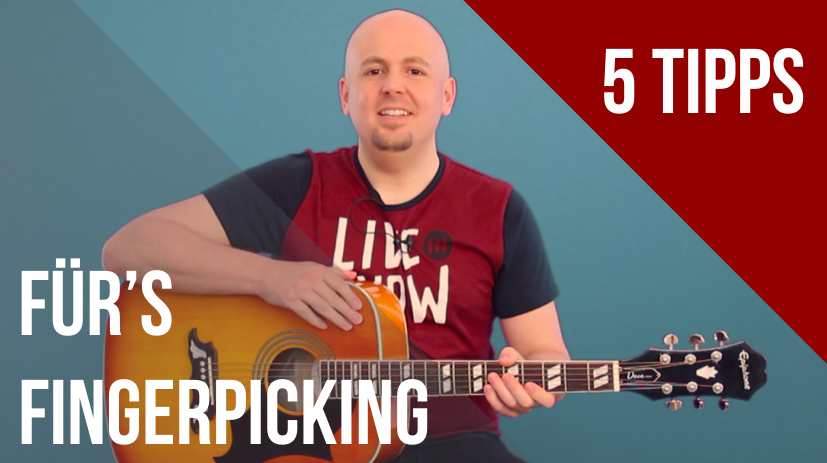 You can find my complete 12-month learning program for aspiring guitarists with all the important chords, techniques and playing styles HERE! It has never been easier to learn to play the guitar under professional guidance.

Fingerpicking or German "plucking technique" is an interesting accompanying technique and is a welcome change, especially when playing according to rhythm patterns or beat patterns.
However, for many guitarists this technique is more difficult to learn than striking the strings with the pick. Personally, I taught myself to play the guitar for the first few years and for years did not dare to play with fingers. It just didn't feel good because I didn't know how it worked properly. So I always used an opening pick to tune the strings because otherwise I couldn't play a clean note.

Check out the video on the subject here:

It wasn't until many years later, during my guitar studies, that I was forcibly introduced to playing with the fingers of the right hand in classical guitar lessons.
Lo and behold: with the right tips, even a committed pick player like me could learn a perfectly acceptable fingerpicking technique.
Since I keep getting e-mails with questions on the subject today and regularly notice in one-to-one lessons that there is a need for action, I will show you my five most important tips on fingerpicking today.

For the other important striking technique, strumming, I recorded another video with 5 essential striking patterns!


Tip 1:
Take care of the fingernails of the right hand!
I totally ignored that in the past, or just didn't think about it at all.
I only cut my nails every now and then with the nail clippers and tried to play with them like that. But that didn't work: my nails were sharp and the result just sounded scratchy, and it didn't feel good either!

In my opinion, there are two possibilities of what you can do with the fingers of your right hand: Either you cut them very briefly with nail scissors, or, even better, you let them grow a little longer, but then they have to be properly cared for become!
A three-stage polishing file is already available for € 1 to € 2 in every drugstore, and with it you can file the edges of the nails wonderfully smooth, simply work them all around one after the other with all three levels of the file!
With filed and polished nails you have a much better basis for fingerpicking, it will automatically sound much better than with sharp-edged cut nails.

Tip 2:
The attitude. I don't mean the guitar position here, that's another topic, but the right hand position. I recommend that you let your hand hover over the sound hole. The fingers should be bent in the middle link, so you form a kind of claw with your fingers. A mistake that I keep observing with the plucking technique is that many guitarists jump up with their hands, away from the strings.
This prevents the necessary flow of play and there is a risk of repeatedly catching the wrong strings. I therefore recommend that you let your hand float calmly over the strings, the movement should come from the base of the finger, similar to when you “snap” your fingers into the hand (see video).

Tip 3:
Plucking with a system.
In my early days, I mostly plucked the strings at random, one after the other, with a single finger.
But the lack of a system practically prevented that I could ever play a piece smoothly. Therefore I recommend the following system:
The ring finger, middle finger and index finger are each responsible for one string when plucking. There are other options, but I use this myself at least 90 percent of the time.
The thumb is alternately responsible for the bass strings, which string it is changes depending on the chord. For chords over six strings, the thumb plucks the sixth string, e.g. in G major.
For chords over five strings, the thumb is responsible for the fifth string, such as in C major. If a chord consists of four strings, such as D major, the thumb plucks the fourth string.
With this fixed system, you never have to ask yourself the question: "Which finger do I take now?", Because everything is precisely defined.

Tip 4:
Don't look.
You have to train that too, of course, but you have to get used to developing a feeling for where the corresponding string is. That is why you should stay in the same place with your hand and not make any large movements, avoid moving too far away from the strings! Then your fingers keep their bearings and know where the string you want to play is.
But if you always look at your right hand, you can no longer concentrate on your left hand or on your template, your lead sheet. Then you probably won't get the song to work either. So very important: Practice the fingerpicking technique so that the right hand works without looking!

Tip 5:
This tip actually concerns the left hand, but has to do directly with the plucking, namely:
As you can see in the video, I only ever use four strings for each chord, namely the bottom three + one bass string, i.e. fourth, fifth or sixth. With the basic plucking technique, multiple bass strings are never played on one chord at the same time.
It follows that we often do not have to grasp all the notes in our left hand that we are used to. To clarify, I would like to use my popular example chords again:
In the G major chord we usually pick the sixth string, fifth string and the first string, or, with the other usual G major guitar fingering, we even pick the lower two strings here. The fifth string is not plucked at all now.
That's why you can leave out the index finger here. By not touching the superfluous notes in the first place, we make it easier for us to change the chords quickly and fluently.
Of course, this only applies to the plucking technique, not to accompanying with punching patterns!
For C major, it's the fourth string that isn't used at all, so we can leave out the middle finger. We cannot reduce the D major fingering any further because it takes place entirely on the lower four strings, and these are all needed when plucking.
This makes it possible to save a lot of movement in the left hand and thus to use a plucking technique even at a higher speed, because you have to grip much less than usual.

That's it, my five tips, and the bonus tip is as always: “Practice, practice, practice!”. Joking aside: The turning point for me came when I forced myself to play a lot with my fingers, which I had previously only practiced with the pick for the sake of convenience. It's kind of like learning to walk and you have to internalize such a technique in order to be able to forget it again. Because you usually need your attention while playing for other things. Maybe start with open strings, and when your right hand starts to feel comfortable, you can step-by-step fingerpicking on songs as well.
I wish you much success!

I would also like to recommend my course “Song accompaniment for beginners” to all beginners, in which I systematically teach the basics of guitar playing over a whole year.
You can find all information about this course on HERE!

Thank you for your attention, please leave me a comment here, see you next time!