How good is Singapore for studying

The island and city-state of Singapore is considered that "Gateway to Asia". This not only relates to its geographical location, but also to the mix of Asian and European culture to be found there. 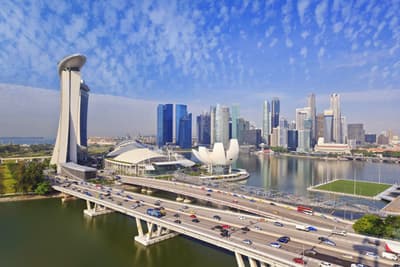 Not science fiction, but reality: studying abroad in Singapore puts you in the future of science and research!

This mixture is explained by the history of the "Lion City" - the direct translation of the name from Sanskrit. As a former trading post and crown colony of the British, it was heavily influenced by immigrants. This is shown, among other things, in the fact that English the common lingua franca is. In addition, Malay, Tamil and Mandarin are the other official languages. Today, more than a third of Singapore's 5.2 million residents have roots outside the city-state.

Its port has always been of great importance for the fortunes of Singapore. Even today it is one of the most important transshipment centers worldwide. The actual city of Singapore is located on the southeastern tip of the island of the same name. It impresses with the exciting interplay of traditional colonial buildings on the one and most modern architecture with imposing skyscrapers on the other side.

The nights in the countless rooftop bars, clubs and restaurants in front of such a backdrop are legendary. At the same time, idyllic parks and gardens in the middle of the urban center invite you to relax. The man-made beaches on Sentosa, one of the 59 offshore islands in Singapore, offer other leisure options. Since the climate is tropical, you can relax here all year round from the humid heat of the city. Studying in Singapore broadens your horizons and offers you in many ways Insights into a multicultural city-state.

The first university in Singapore was founded by the British in 1905. Today exist in Singapore four state universities as some private universities. Another part of the university landscape are four Polytechnics. With their practice-oriented study programs, these polytechnic universities are similar to German universities of applied sciences. It is centrally responsible for the administration and quality control of all educational institutions, including private ones Ministry of Education (MoE).

Internationality of studying in Singapore

International exchange plays a major role in the education sector, as in almost all other areas in Singapore. Most of the lecturers and scientists come from abroad. In addition, a larger number of foreign universities with their own branches based in Singapore. These include, for example, branches of the Australian James Cook University, the Paris Sorbonne and the Technical University of Munich.

Reasons to study abroad in Singapore

Studying in Singapore? There are a number of reasons in favor of choosing the Southeast Asian city-state as a study location. The state and private educational institutions in Singapore are usually equipped with very modern equipment and are heavily subsidized by the government. Accordingly, Singapore's universities have a good reputation: Singapore is considered to be one of the most important locations for science and research in Asia. The curricula are aligned with the modern world of work and current research.

The higher education landscape also benefits from Singapore's role as an important one Switching point for the global economic market and trade. Most universities cooperate with Singapore-based institutions and companies. A study abroad in Singapore accordingly provides good insights into the Asian market, which is gaining more and more importance globally. 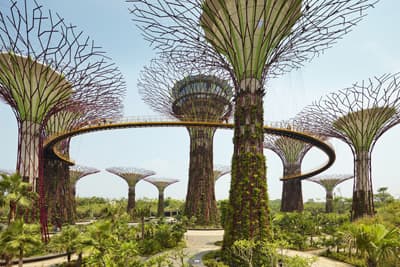 Even more science fiction feeling in Singapore: The artificially created "Gardens by the Bay" are a dream for every biology student.

The academic year in Singapore is mostly in two semesters divided. At some universities, too three trimesters. Every educational institution in Singapore - from kindergarten to university - has theirs own Academic Calendar, so that generally valid statements in this regard are difficult.

Signs of studying in Sinagpur

Studying in Singapore is usually both demanding and encouraging. In line with the prevailing mentality in East Asia, the study system is clearly structured.

A quick completion of the Programs with a high relevance to applications and topicality is very important for the Asians. During the semester, the performance of the students is regularly checked through tests and presentations, so that the final exam at the end of the semester is not solely decisive for the grade. Oral participation in lessons plays an important role. Classical lectures with frontal teaching are rather rare.

The higher education and education system is strongly influenced by Great Britain due to the colonial history of Singapore. The degrees Bachelor, Master and Ph. D. were based on the British model created. They are consecutive and the course is modularized.

The first stage of study in Singapore includes the academic bachelor's degree, which usually ends in Singapore four years is designed. At universities with a trimester system, the duration of study can also be shorter, since these universities get by with fewer holidays. General basic knowledge is taught in the first year of study. Technical specialization then follows in the following years.

After successfully completing a bachelor's degree, a master's degree can be added. One or two more years should be planned for this. There is the possibility to choose between one Master of Coursework and one Master of Research to choose: The former is mainly geared towards a quick career entry. This also applies, for example, to the Master of Business Administration in Singapore. The scientific specialization plays a subordinate role and the attendance of courses and lectures predominates. The study time is about one and a half years.

It is different with that Master of Research. The core of this course is the creation of a written thesis based on your own research. It usually takes two years to graduate. The Master of Research is the ideal basis for a doctorate. As a rule, Ph.D. plan at least two more years of study. There is in Singapore different doctoral procedures. The Ph.D. on the master. However, there are also Ph.D. degrees for which a bachelor's degree is sufficient.

Requirements for studying in Singapore

Sufficient language skills are also required to study in Singapore: Because the classes at the universities in Singapore are held in English advanced knowledge of English inevitable. They can be proven by means of a minimum number of points in standardized language tests such as IELTS and TOEFL. English is also spoken in most public areas and in science and business. In everyday life it is about "Singlish", a charming language creation from British and American English with a strong Asian influence.

In an Asian comparison, the standard of living in Singapore is extraordinarily high, which is reflected in the above-average cost of living. A study visit to the city-state of Singapore can therefore quite expensive be.

Cost of Living in Singapore

The prices for student accommodation in particular often take getting used to due to the limited space in Singapore. You should avoid apartments in the city center. Here a one-room apartment hardly costs less than EUR 1,500 a month. They are far cheaper Student dormitories: They offer rooms between EUR 400-550 per month. Here it is important to get in touch with International Office to apply for a place at his university. Many international students live in Singapore while studying abroad private apartment complexes and pay there between EUR 500-800 per month.

In contrast to the accommodation, the very well developed public transport in Singapore and the daily catering are in one of the numerous Hawker Centers or Food courts the city very cheap.

The tuition fee in Singapore vary depending on the university, subject and program. For a bachelor's degree, they are on average around EUR 9,300 - 25,000 per year. For a semester abroad in Singapore you can use EUR 4,500 - 8,000 calculate.

Offer a financing option Partial scholarshipssuch as those granted by the DAAD or other political, economic or cultural organizations. As a rule, the requirement for admission to these funding programs is correspondingly good academic performance. The federal government offers a funding option that is even more dependent on the individual financial situation. With the Auslands-BAföG, he offers support independent of the domestic BAföG for a maximum of one year. Student loans are another financing option for studying abroad in Singapore.

German citizens need this to study in Singapore Multiple Journey Visa. You can use this to enter and leave the country multiple times. On site you will first receive the Social Visit Passwhich is valid for two to four weeks. After successful enrollment, students can take the next step Student’s passport apply for study in Sinagpur. If you want to study in Singapore for more than six months, you must submit a health certificate in addition to the application. This is available on site from one of the approved hospitals. Citizens of the EU must also have a so-called Security deposit in the amount of around EUR 1,000 deposited with a recognized Singapore bank.

By the way, you can use a passport that is valid for at least six months for Enter Singapore for a maximum of 90 days. You will then receive a temporary residence permit. This is noted directly in the passport. However, this period should not be overstrained under any circumstances, as severe fines or imprisonment could then be imposed.