What happens when the DNA stops working

Gene mutations and repair mechanisms of the human cell 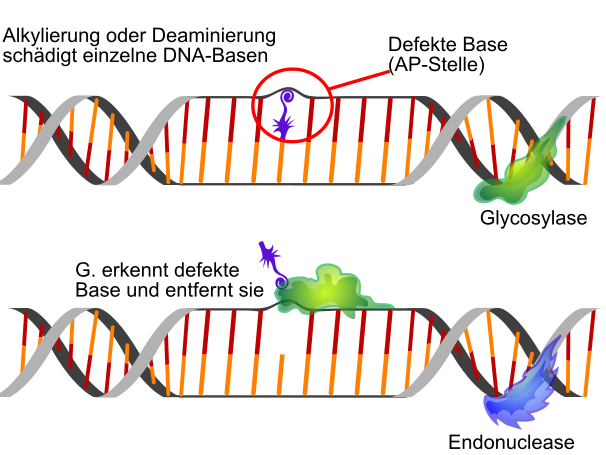 Image: "Base excision repair is one of the easiest types of DNA repair" by LadyofHats. License: Public Domain 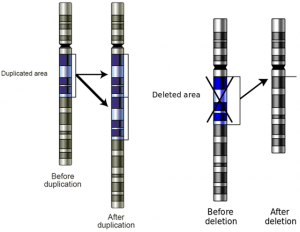 The Gene mutation is limited to changing a gene. It is caused by a Point mutation, that is, the change of a single base Insertion (Adding a base) or Deletion(Removal of a base) within the DNA sequence. 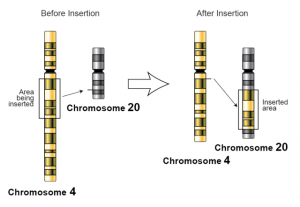 Image: “An illustration of an insertion at chromosome level” by the National Human Genome Research Institute. License: Public Domain

Consequences of a gene mutation

Since the triplet code of DNA is redundant, a triplet with a point mutation may code for the same amino acid - the mutation is quiet and remains without effect. However, it can also lead to a change in the code (Missense) or change the code to a stop codon (Nonsense).

Insertion and deletion of a base are often serious because they shift the reading frame from the mutation (Frameshift). As a result, all triplet codons following the mutation are changed. The cell's repair mechanisms are limited to these gene mutations.

Causes of a gene mutation

A mutation can arise in different ways. The DNA replication is despite the proofreading function of the polymerase not error-free. On the one hand, a wrong base can be incorporated, and on the other hand there is a risk that the polymerase will “get stuck” in repetitive sequences and incorporate far more repetitions of the sequence into the new strand (polymerase slipping). This is the case, for example, with Huntington's disease.

Furthermore is the DNA is not completely chemically stable. Spontaneous depurination (a purine base is split off) or deamination (e.g. conversion of cytosine and uracil) can occur. Also exogenous noxae affect the DNA. UV light causes thymine dimers, which prevent further reading of the DNA. Other toxins cause alkylation (e.g. mustard gas) or store themselves in the DNA and cause strand breaks (e.g. ethidium bromide).

Repair mechanisms of the eukaryotic cell

The repair systems overlap in their area of ​​responsibility, so that a defect can be eliminated in different ways. These redundancy ensures efficient troubleshooting. The damage to single strands of the DNA can either be repaired directly or exchanged for new bases or new nucleotides. There are also two repair methods for double strand breaks.

Alkylated DNA can be repaired by the O6-Alkylguanine alkylase transfers the alkyl group of the base concerned to itself. This transfer is irreversible and the enzyme is used up. The term “enzyme” is therefore actually wrong. In many organisms, but not in humans, a photolyase can cleave thymine dimers in a light-dependent manner.

This type of repair is much more common. There are three different approaches: 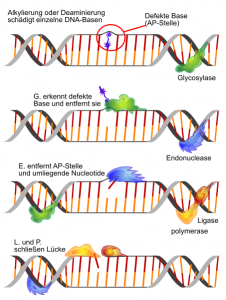 Image: "Base excision repair is one of the easiest types of DNA repair" by LadyofHats. License: Public Domain

The DNA glycosylase recognizes the changed base and removes it. The AP endonuclease (apurine and apyrimidine recognizing enzyme) then recognizes the gap and cuts out deoxyribose and phosphate together with a phosphodiesterase. The polymerase ß can now add new nucleotides to the free space, which are linked to the existing strand by a ligase. This repair often takes place during deamination, for example when instead of a cytosine there is a uracil in the DNA.

Subunits of the transcription factor TFIIH do not recognize individual defective bases, but rather short DNA segments whose topology has been changed. Several bases before and after the recognized point becomes the Single strand removed and re-synthesized. Since the protein complex is a transcription factor, this type of repair often takes place on active genes that have just been transcribed.

In the case of xeroderma pigmentosum, this repair mechanism is defective. Those affected are very susceptible to skin cancer because they are sensitive to normal UV radiation. They have to avoid the sun and are therefore often referred to as "moonlight children".

There is no defective base here, but despite the proofreading function, a wrong base installed. The exchange of the wrong base in humans is mediated by the MSH and MLH proteins. The distinction as to which of the two non-complementary bases is the wrong one is made in E. Coli via the degree of methylation.

DNA is methylated in the bacterium. In the case of DNA that has just been replicated, the mother strand is strongly methylated, the newly synthesized strand with the wrong base is not yet. This methylation does not exist in humans, so it is still unclear how the proteins can differentiate between the old and the new strand.

A double strand break can be particularly dangerous for the cell. On the one hand, there is no longer an intact copy of the information; on the other hand, these broken, free DNA ends can interact with other DNA. So it can be Attachment of one chromosome to another come. Chromosome mutations are the result. To prevent this, the cell has two methods.

Be here two DNA fragments linked together. Correct restoration of the DNA is not taken into account, and a few more bases are often removed. Still, it's a working compromise that prevents further damage.

First of all, the cell cycle is stopped by the protein p53. Then the complex KU80 / KU70 recruits a DNA protein kinase, the DNA ligase 4 and the XRC4 protein at the free ends to form a large complex which links both ends.

The homologous chromosome of a diploid cell is used here. Two short single strands are created at the DNA break, which are combined with the healthy, homologous chromosome by strand inversion. The proteins BRCA1 and BRCA2 are involved in this process. A mutation in these proteins increases the risk of breast, ovarian and prostate cancer.

1. Which of the following enzymes / proteins is not involved in DNA repair in humans?

2. A spontaneously occurring DNA mutation is ...

3. Which statement is wrong?

Our articles are the result of the hard work of our editorial team and our specialist authors. Strict editorial specifications and an effective quality management system help to ensure the high relevance and validity of all content. Find out more about the editorial team, our authors and our work processes.