What if the Supreme Court were a villain?

Rule of law in Poland: a deterrent for judges

The Polish Disciplinary Body violates EU law. This is the conclusion reached by an expert from the European Court of Justice. 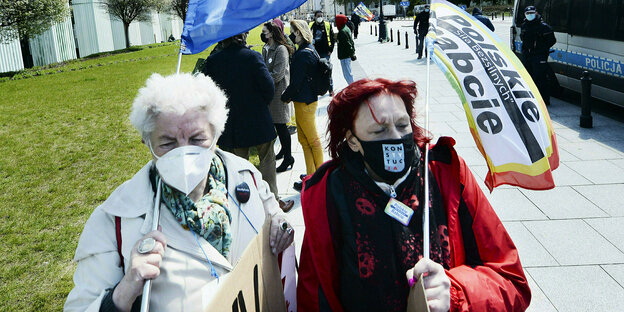 Protest in front of the Supreme Court in Warsaw against judicial reform in Poland Photo: Czarek Sokolowski / ap

FREIBURGtaz | The tasks and composition of the disciplinary body at the Polish Supreme Court are incompatible with the principle of an independent judiciary. This is the conclusion reached by the independent Advocate General Evgeny Tanchew in proceedings at the European Court of Justice (ECJ) and recommended the condemnation of Poland.

In October 2019, the EU Commission initiated infringement proceedings against Poland because of this disciplinary body. On the one hand, their independence and impartiality are not guaranteed because the judges were selected by the State Judicial Council, which in turn is under the control of the PiS-led government majority. In addition, it is also questionable that the content of the case law and the submission of a case to the ECJ can trigger disciplinary proceedings against the judges.

The independent Advocate General Evgeny Tanchew commented on these proceedings and supported the EU Commission. The mere possibility that judges could be subjected to disciplinary measures because of the content of their court decisions undoubtedly has a deterrent effect and is incompatible with the principle of judicial independence. For this and other reasons, Tanchev recommended that Poland be condemned. The ECJ will decide in a few weeks. (C-791/19)

It is important in this context that the disciplinary body has already been the subject of another ECJ proceedings. In November 2019, at the request of the Polish Supreme Court, the ECJ ruled that it is against EU law if legal disputes on EU legal issues fall within the jurisdiction of an institution that is not an independent and impartial court. On this basis, the Supreme Court of Poland decided in December 2019 and January 2020 that the Disciplinary Chamber is not an independent court - neither under EU law nor under Polish law.

Nevertheless, the disciplinary body continued to work. Therefore, the EU Commission applied for a temporary injunction against Poland at the end of January 2020. The disciplinary body should cease its activities until the end of the infringement proceedings. The ECJ issued the requested order on April 8, 2020.

However, Poland ignored this urgent decision of the ECJ. The disciplinary body continued to work. The EU Commission could have applied for a fine against Poland, but waived it.

Instead, the EU Commission initiated new infringement proceedings against the Polish judicial reform at the end of March 2021. This time it went against the so-called “muzzle law”, which forbids Polish courts to examine the judicial independence of other Polish courts and to request a preliminary ruling from the ECJ.

In this law, which came into force in February 2020, the further work of the disciplinary body at the Supreme Court was expressly ordered. (C-204/21)

In addition to the renewed infringement proceedings, the EU Commission has also applied for an interim order from the ECJ in this proceeding. A decision by the ECJ is still pending. The struggle for the Polish disciplinary body continues on several levels.