Was the Confederate flag a state flag

mobile view, to the English Version tap the flag

• Meaning / origin of the flag

• Meaning / origin of the coat of arms

• Origin of the country name

In 1861 the southern states of Mississippi, Florida, Alabama, Georgia, South Carolina and Texas formed a special union to protect their interests, the "Confederate States of America". Other southern states - North Carolina, Virginia, Kentucky, Tennessee, Missouri, Louisiana, and Arkansas - later joined. After the lost war against the USA, the states of the CSA were incorporated into the state territory of the USA until 1877.

1861–1863,
Maritime finance and customs service,
Source, according to: World Statesmen

1865, The "Stainless Banner"
National flag,
Source, based on: Corel Draw 4

Meaning / origin of the flag

Almost all later member states of the CSA had acquired their own independence flags when they left the USA. On February 4, 1861, these states merged to form the CSA, and the "Stars and Bars", the CSA's first flag, was hoisted. The colors of this flag go back to the flag of the USA, and the number of stars in the blue field in the upper corner also shows the number of member states. As more and more states joined, Kentucky was the last to join in 1862, the number of stars was changed to 13 pieces. A war flag was introduced in September 1861. The "Battle Flag" was square and showed a blue diagonal cross with white stars on a red background, separated from it by a narrow white line. It goes back to a flag that was used in South Carolina in 1860. A new national flag was adopted on May 26, 1863. The "Stainless Banner". It was a plain white flag with the "Battle Flag" in the upper corner. Due to the large white area, this flag was apparently often seen as a surrender signal, so that on March 4, 1865 a vertical red stripe was added to the flying end of the flag.

Source: The World of Flags

Coat of arms of the Confederate States of America,
Source, according to: www.arlingtoncemetery.net

Meaning / origin of the coat of arms

The CSA used a seal. It showed George Washington on horseback, surrounded by a wreath of farm produce. The inscription shows the name of the state and the date "December 22, 1862", the day President Jefferson Davis was sworn in, and the state motto: "Deo Vindice" (With God as our protector). 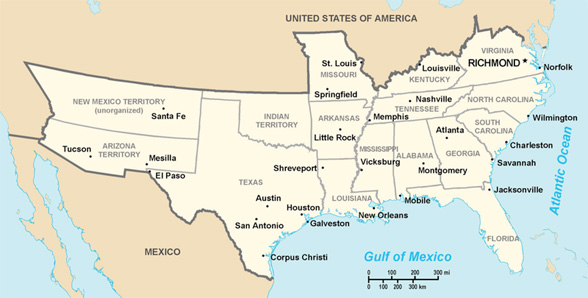 January to February 1861 · Leaving other states

February 9th, 1861 · Election of Jafferson Davis as President of the CSA

April 3rd, 1865 · Relocation of the capital to Danville

April 9, 1865 General Lee surrenders at Appomattox (Virginia) as commander of the Confederate Army of Northern Virginia, the other CSA armies gradually surrender by July 1865

11/6/1865 the CSA warship and commercial disruptor C.S.S. Shenandoah will be the last CSA unit to drop the flag in the British port of Liverpool

December 18, 1865 · The 13th Amendment to the Constitution passed by the US Congress in January 1865 becomes legally binding, and slavery is finally abolished in the USA.

Origin of the country name

The CSA were a counter-project to the USA, which should also be reflected in the country's name. A confederation is a special union.

The Confederate Memorial Day will be in Texas on January 19; in Missouri on April 6; in Alabama and Mississippi on April 24; in Arkansas on April 25; Committed in Florida, Georgia, Kansas, and Arizona on April 26; in North Carolina and South Carolina on May 10; in Virginia on May 30; and in Kentucky, Louisiana, and Tennessee on June 3.

Jefferson Davis · President of the CSA

Jefferson Finis Davis (born June 3, 1808 in Fairview, Kentucky; died December 6, 1889 in New Orleans, Louisiana) was the President of the Confederate States of America (CSA) from 1861 to 1865. Before that, he was Senator for Mississippi in the United States and Secretary of War from 1853 to 1857. Jefferson Davis and his company were captured near Irvinville, Georgia on May 10, 1865. On May 24th, 1865 he was charged with treason. The war was fought with relentlessness and extreme cruelty on the part of the US, and only an unconditional surrender by the CSA should be accepted to end the civil war. An honorable peace was not foreseen, especially not for the leader of the defeated country. Over the next two years, Jefferson tried to appeal to Davis to be held responsible for a show trial. It was found, however, that neither Jefferson Davis nor the CSA had broken any law, and it was also established that Jefferson Davis had done everything possible to prevent secession from the Mississippi Senator prior to the secession of the South. Only when the secession had been decided did he - in his own words - "put himself at the disposal of the cause because it was too serious to be left to the amateurs". His office as US Secretary of War (this official title was common around the world at the time) he had exercised "as best as possible". After the USA recognized the independent CSA, Davis envisioned a CSA-USA federation with a common foreign, security and foreign economic policy. In the battle of Manassas / Bull Run, won for the south in 1861, Jefferson Davis had forbidden any pursuit of Union troops in order to "not appear as an aggressor". As one had to find out in court, a traitor looks different. He was released from prison on May 14, 1867, and the proceedings were discontinued in 1869. In 1978, Jefferson Davis was posthumously restored to US citizenship. With that he is completely rehabilitated.

The flag of the Confederation

A heated dispute broke out in 2015 over the so-called flag of the Confederation, in the course of which the flag was outlawed and removed from many public buildings in the southern United States. The reason was that the flag was a racist symbol because the Confederate States of America (CSA) wanted to use this flag to defend racism and slavery as a kind of state of affairs by means of the American Civil War. That may be partly true, but it does not go far enough, and the banishment from the public is nothing more than senseless, actionist iconoclasm that does not solve the real problems.

The war broke out in 1861 because the numerical balance between slave-owning and non-slave-owning US states that existed in Congress - through the annexation of new states in the West - was in danger, not least because of the election of Lincoln as president. Some southern states then left the Union, a constitutional right they still had at the time. Only after the harsh measures taken by Lincoln, which incidentally did not do justice to the constitution - i.e. the existing law - did other southern states join the CSA.

The mobilization took place on the part of Lincoln, who absolutely wanted the war, the south initially acted defensively. What the much-cited shelling of Fort Sumter really was, this so-called trigger of the war, is not always known. The fact was that the crew of Fort Sumter did not want to submit to the troops of the CSA, so the troops of the CSA shot at the fortress to convince the crew to give up. The occupation negotiated, and an honorable withdrawal was agreed upon with the US troops parading out of the fort, armed with arms. The CSA troops fired a salute, and an artillery accident resulted in the only two fatalities.

The southern states simply wanted to keep their constitutional independence, their legal and value system, not allow Washington to dictate how they should live and demanded free trade, goods from Europe and Canada without annoying protective tariffs. Even then, slavery was largely outlawed internationally. However, the CSA sought international recognition, especially from Great Britain and France. A prerequisite for this was the abolition of slavery. So it is not surprising that the plans to abolish slavery were already in the drawer, but the implementation would have been a process, and not an abrupt break, after all, the agricultural slave economy was the economic backbone of the CSA, and you can't break that yourself .

The fact that the civil war led to the liberation of the slaves was a consequence, but not the cause, of the war. The war goal of the north was to restore the state unity of the USA, with or without slavery. The proclamation of the liberation of slaves was perceived as pure hypocrisy in the south, because slavery had previously existed in some areas of the Union and was absolutely legal: In Washington (the Union capital), slavery was abolished by decree in April 1862, and the previous owners were even compensated financially. Slavery existed in the Nabraska Territory until 1861, in Delaware until December 1865, in the Union-controlled part of the Indian Territory until 1864, in Maryland until 1865, in West Virginia until 1865, in Missouri until 1863, in Kentucky and also in New Jersey until 1865.

Because of the relentlessness with which the North waged the war, a draconian justification was ultimately necessary, which Lincoln needed as a categorical justification before the people, and which he brought into play as a war goal - one year after the outbreak of war. It is often overlooked that the cause of the South, apart from most white southerners, was also defended by about 13,000 Hispanics, Tejanos and Mexicans, by about 10,000 Indians and also by 10,000 Black soldiers, for the same pay as their white comrades . In 1890, 3,573 Black Confederate veterans were still living on soldiers' pensions. There were about 380,000 white slave owners in the southern states, but also about 3,000 slave-holding Indians and also about 10,000 slave-holding blacks. Half of all slave owners had 1 to 5 slaves, and around every twentieth had more than 20.

As you can see, the cause of the South does not appear very monochrome. One should therefore see slavery not as a racist problem, but as an economic order. Whether this was okay as it was, right or wrong, good or bad, black or white, is not an issue in a scientific-historical perspective. It is simply not possible to apply today's moral standards to facts of the past and to transfer them to the modern age as a call for action. The states of the North and the South, ironically, acted in full compliance with their respective constitutional laws. That is why the responsible politicians of the CSA could not be tried by the victors after the end of the war, because they had not violated any law. Not only was Jefferson Davis - the President of the CSA - completely unmolested. The only one to break the Constitution on multiple occasions was President Abraham Lincoln. He was always aware of this (more information? → click here).