How does the Campbell Stokes recorder work

The two high pressure areas NORBERT and ONNI have ensured abundant sunshine and summer temperatures throughout Germany in the last few days. The maximum achievable daily sunshine duration was often recorded at the weather stations of the German Meteorological Service. The duration of sunshine is not one of the most important basic meteorological parameters, but it is recorded across the board, at least in Germany. 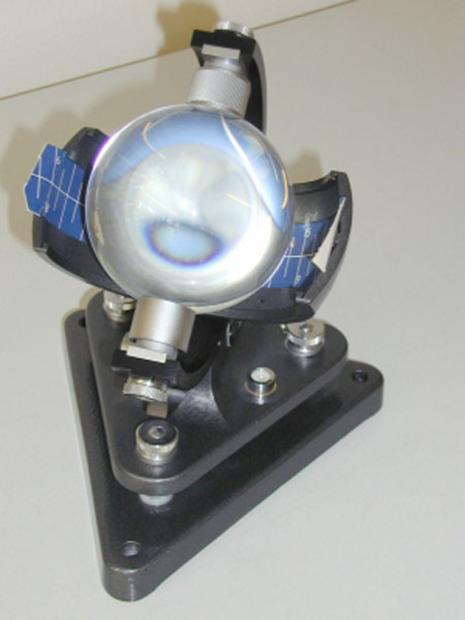 From the end of the 19th century to around the turn of the millennium, the meteorological institutes often used the Campbell-Stokes sunshine autograph (also known as a thermograph) to measure the duration of sunshine. Its designer, John Francis Campbell (1821-1885, born in Edinburgh, died in Cannes), was a Scottish researcher who dealt with questions from many different scientific disciplines. He invested his heart and soul especially in the investigation of Celtic customs and ways of life.

Apart from that, in 1853, driven by the urge to research that had already developed in his youth, he constructed the first measuring device for recording sunshine. Shortly afterwards, scientific interest in Campbell's invention increased significantly, as he himself suspected, among other things, that the cholera outbreak in London around 1854 might have been related to the meteorological conditions prevailing at the time. In order to be able to examine such a dependency, the meteorological observations were expanded and for the first time the duration of sunshine was recorded systematically.

The second namesake of the invention, the outstanding mathematician and physicist Sir George Gabriel Stokes (1819-1903), carried out modifications to the original apparatus up to 1880. In addition to this engineering work, the Irishman earned great merits, among other things, in fluid dynamics, the mathematical and physical relationships of which have a strong influence on theoretical meteorology. Every student of meteorology should be familiar with the Navier-Stokes equations. The sunshine autograph, which has only changed slightly since then, consists of a glass ball, which is aligned with a variably adjustable inclination in the direction of the sun's path (in the northern hemisphere towards the south). The sphere is surrounded by a concentric spherical shell into which a recording strip made of special paper is inserted. This strip, which is printed with a time scale for better evaluation, is located exactly in the focal point of the glass ball. As a result, the bundled rays of the sun leave a burning trail on the paper (burning glass effect).

However, especially in the middle and higher latitudes, there is the problem that the position of the sun and the path of the sun change significantly over the course of the year. Therefore, differently curved paper strips are used to record the burning track, which are also attached in different positions on the spherical shell. In total, there are three different paper formats: one for low sun paths (winter), a second for summer and a third for the transitional seasons. It is precisely for these adjustments that George Gabriel Stokes has made a name for himself. [Literature: Sanchez-Lorenzo, A. et. al. (2013): New insights into the history of the Campbell-Stokes sunshine recorder; in: Weather-December 2013, RMetS]

This basically very robust measurement technology also has a few weaknesses. Dew or frost deposits on the glass ball can lead to inaccuracies, and incorrect records can also be caused by wet paper or snow. In addition, the labor-intensive daily exchange of the registration strip as well as the manual evaluation is a major disadvantage. In addition, in the last few decades the new technical possibilities have promoted the introduction of automatic measuring systems using light-sensitive photo elements. In addition, the duration of sunshine is increasingly becoming a scientific background, since the individual components of the radiation balance can now be precisely measured.

But back to the meteorological present. How are things going with the sunshine now? The influence of high pressure is increasingly weakening, so that the foothills of the MADELEINE depression can spread to Central Europe. In Germany, these are initially noticeable in the northwest with a few cloud fields. In addition, heap clouds are formed, which can be accompanied by showers and thunderstorms in the afternoon and evening from the west and in the mountains. In the south and east, however, the sunshine can be enjoyed until the evening. At the beginning of the week, the sun appears less everywhere and showers and thunderstorms are the order of the day, especially in the middle and in the south. Both today and on Monday, the storm threshold can be exceeded locally by heavy rain and hail.